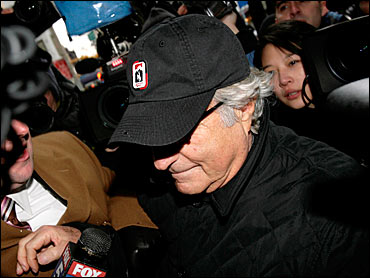 Prosecutors on Monday said disgraced financier Bernard Madoff violated bail conditions by mailing about $1 million worth of jewelry and other assets to relatives and should be jailed without bail.

"The defendant's recent actions amount to obstruction of justice," Assistant U.S. Attorney Marc Litt told a judge at a hearing in federal court in Manhattan.

Madoff's lawyer, Ira Sorkin, described the items as heirlooms that included cufflinks and antique watches. He said they were not significant assets.

The items were sent to Madoff's children and to unidentified friends vacationing in Florida.

"We maintain it happened innocently," Sorkin said. "He's not a threat to the community and there's no danger he's going to flee."

Madoff later left the courthouse, riding away in a silver sedan while surrounded by a swarm of cameras, and returning to his Upper East Side apartment.

Inspector General H. David Kotz said he is so concerned about the SEC's failure to uncover Madoff's alleged pyramid scheme that the IG is expanding the inquiry called for last month by SEC Chairman Christopher Cox. Cox had pushed the blame squarely onto the SEC's career staff for the failure to detect what Madoff was doing.

Markopolos agreed to testify at first but ended up telling Congress he was too physically worn down and needs more time.

A derivatives expert, Markopolos first alerted officials nearly 10 years ago about what he saw as Madoff's scam. Then 2005 he sent this 19-page report to the SEC titled "the World's Largest Hedge Fund is a Fraud"

Read more about Madoff whistleblower Harry Makopolis in the "Couric and Co." blog

At the first congressional hearing on the scandal, Rep. Spencer Bachus, a Republican, called for Congress to create a regulatory structure "for the 21st century."

The House Financial Services Committee is trying to determine how, despite warnings back to at least 1999 to SEC staff members, Madoff continued to operate his alleged scheme.

Kotz said that he will examine the operations of the SEC's enforcement and inspection divisions and will make recommendations, steps beyond what Cox had called for.

"I am a human face on this tragedy," said Allan Goldstein, a retired New York textile distributor who was expected to testify at Monday's hearing.

Goldstein, 76, said he lost his entire life savings with Madoff and had to cash in his life insurance policies to cover his mortgage.

"Everything I worked for over a 50-year career is gone," Goldstein said in an e-mail message from his attorney's firm. He said he had no reason to question the steady returns of 8 percent to 12 percent a year that Madoff's firm told him he was earning.

The Securities Investor Protection Corp. and the trustee handling the liquidation of Madoff's firm said Monday they mailed more than 8,000 claim forms to customers on Friday. Besides individuals, others who lost money were big hedge funds, international banks and charities.

Lawmakers jumped on the opportunity to show concern in the first congressional hearing since the scandal broke with Madoff's arrest on Dec. 11.

Rep. Brad Sherman, a Democrat, insisted that all five SEC commissioners should tender their resignations to President-elect Barack Obama.

Republicans warned against rushing to new regulation as a response to the SEC breakdown.

"While the failures of regulatory and private-sector due diligence exposed by the Madoff matter are obvious, they do not lead me to conclude at this stage of the inquiry that what is needed are broad new legislative or regulatory mandates on the rest of the securities industry," said Bachus, the senior Republican on the panel.

"What we may have in the Madoff case is not necessarily a lack of enforcement and oversight tools, but a failure to use them," he said.

The Madoff scandal allegedly involves a pyramid scheme, in which people are persuaded to invest in a fraudulent operation. The early investors are paid their returns out of money put in by later investors.