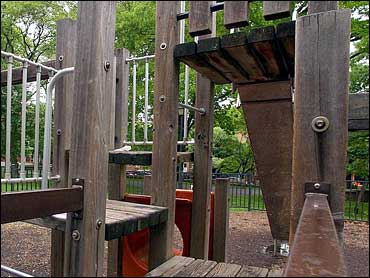 The Consumer Product Safety Commission voted unanimously to adopt its staff's finding and recommendation that a ban was not needed because most manufacturers already have stopped using the treated wood and other makers soon will follow suit.

The lumber in question is treated with a pesticide, chromated copper arsenate, that protects it from decay and insect damage. Almost all wooden playground equipment has been treated with the pesticide. The concern is that children can get cancer-causing arsenic residue from the treated wood on their hands, then put their hands in their mouths.

Besides playgrounds, the treated wood has been used in picnic tables and decks.

Environmental organizations had asked the commission to ban the treated wood.

The lumber industry has maintained that the treated wood is safe and that children are exposed to more arsenic in food and water than on the playground. Still, following discussions with the Environmental Protection Agency, the industry agreed in February 2002 to phase out the treated wood by December 2003

The industry's agreement applies to new products. The commission and the EPA are studying ways to coat existing products made of treated wood with a sealant to prevent arsenic from seeping through.