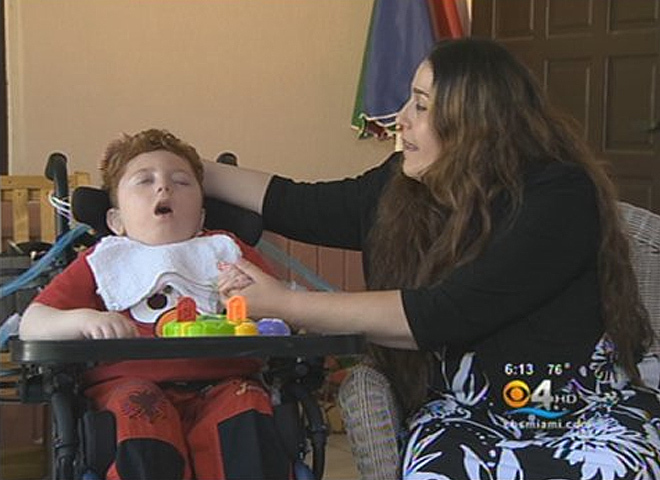 The Department of Justice sent a letter to state Attorney General Pam Bondi this week, saying that in visits to six nursing homes around the state, investigators identified numerous children who didn't need to be there and who "would benefit from moving home with their families or other community settings."

The Miami Herald reports that, according to the letter written by Assistant U.S. Attorney General Thomas E. Perez, hundreds of Florida children spend their formative years with virtually no education or socialization.

Some children, the letter stated, "are unnecessarily separated from their families and communities for years," including some who entered facilities as infants or toddlers, and have spent a decade or longer institutionalized. Florida, the letter states, administers a system providing "unnecessary segregation and isolation of children, often for many years, in nursing home facilities."

Federal officials concluded the state has made it difficult for children to get medical services that would allow them to move back home.

Bondi's office is defending the state against a previously filed lawsuit that claims the institutionalization of children violates federal law, including Title II of the Americans With Disabilities Act.

Critics have said that Florida has in recent years repealed state rules limiting the number of children that can be housed with adults in nursing homes, and have relied more and more upon nursing home facilities to house children who could receive care safely - and more cheaply - with their families.

Perez states that if the state does not take steps outlined in the letter to "correct" the practice, the Justice Department may take action of its own.

Bondi's office did not immediately respond to a request for comment.

The DOJ investigation found that Florida had implemented policies "that impair access to medically necessary services and supports that would enable children to transition home or to other community-based settings." Among the practices cited are the state's reducing or limiting the availability of medically prescribed in-home services "without reasonably considering the child's actual needs"; and making substantial cuts to programs designed to support children and adults with developmental disabilities in the community while simultaneously expanding facility-based care, including enhanced perdiem rates.

For a majority of the children referred to these facilities, Florida pays more than $500 per day per child - more than double what the facilities receive from the state for their elderly residents.

CBS Station WFOR reported earlier this year that the families of more than 250 children were suing Florida for unnecessarily institutionalizing their children, claiming the state told them needed medical care would be withheld unless the children were placed into a nursing care facility.

DOJ said the state's policies put children with medically complex or medically fragile conditions who currently live at home at risk of placement in nursing facilities and other segregated institutional environments if they are to receive necessary care.

"Nursing homes are not made for children," attorney Matt Dietz told WFOR correspondent Michele Gillen. "A parent should not have a gun placed to their head - 'Take less care, or your child's going to go into a nursing home.'"