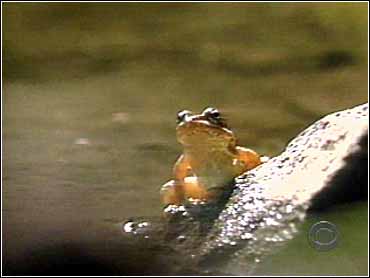 The U.S. government began a major study Thursday to try to determine why frogs and other amphibians are dying off or being born with deformations.

"There’s something really strange happening to the frogs around here," said Jamie Rappaport Clark, Director of the U.S. Fish and Wildlife Service.

And that may be an understatement.

Malformed frogs, just in America, have been found in more than 30 states, while globally, all amphibians including salamanders and toads are now considered a threatened class of animal.

"We don’t know exactly why frogs are being deformed but our list of suspects includes chemical pesticides, fertilizers and other pollutants," Clark said.

The survey comes on the heels of a study by the Center for Marine Conservation that found that pollution has left U.S. coastal waters "over-fished, over-polluted and under-protected." Up to 45 percent of the waters were found to be unsuitable for fishing or swimming.

To do their survey, the scientists will catalog the health of frogs in 43 wildlife refuges around the country, including ones considered pristine. In what has been a shock to many biologists, studies have already found frogs being harmed in areas not known to be polluted.

To Clark, the problem is alarming. “National wildlife refuges are some of the most natural wild places left on earth and if the frogs here aren't safe then you can just imagine the true scope of the problem.”

The goal of the survey is to find hot spots— areas where the harm to amphibians is so great, the cause might be traced. The stakes behind the survey are critical, and not just for frogs.