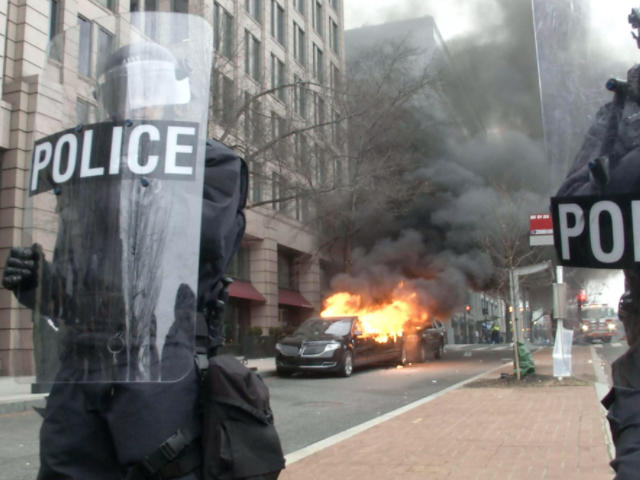 WASHINGTON -- The U.S. government announced that it is abandoning its prosecution of more than 120 defendants charged with crimes over their involvement in violent protests on the day of President Trump's inauguration one year ago. The announcement came Thursday, after a Washington jury in December acquitted the first batch of six defendants on all charges.

A statement from the U.S. Attorney's office said the government will continue to pursue felony charges against 59 defendants, while moving to dismiss the misdemeanor cases against the remaining 129 defendants. All were charged with crimes ranging from inciting a riot to destruction of property.

The announcement marks a major change in strategy for the government, which had originally planned a series of group trials that were to extend through most of 2018. That plan suffered a setback with the acquittals in December.

The announcement was hailed as a victory by supporters of the defendants, who claimed from the start that the trials were an attempt by the Trump administration to suppress and criminalize dissent.

Kris Hermes, an activist and spokesman for the Defend J20 Resistance, said the movement still intends to mobilize on behalf of the remaining 59 defendants against "what is clearly a political prosecution."

The charges stem from a violent Jan. 20 protest, in which hundreds of demonstrators dressed in black, many with their faces masked, marched downtown toward Franklin Square. Some marchers broke windows in a bank and a Starbucks, and a limousine parked on K Street across from Franklin Square was trashed and set ablaze.

In the first group trial, the government pursued a somewhat unusual strategy: Rather than trying to prove that any of individual defendants was personally guilty of destruction, prosecutors argued that all demonstrators present that day were aware and supportive of the violent intentions of the others.

Much of the evidence consisted of a variety of videos, from security cameras, police helicopters and, in some cases, posted to social media by the defendants themselves. Prosecutors also interviewed dozens of witnesses, but none who could identify any of the defendants as a perpetrator.

Even before the jury began its deliberations, Judge Lynn Leibovitz seriously damaged the government's case by throwing out the most serious charge against the six -- a felony charge of inciting a riot. Leibovitz said there simply wasn't evidence to support the charge and the jury's verdict proved that prosecutors had failed to present convincing evidence to support even the remaining lesser charges.

In Thursday's court filing, Assistant U.S. Attorney Jennifer Kerkhoff said the government "is focusing its efforts on those defendants who engaged in identifiable acts of destruction..."

The next trial is scheduled to begin on March 5, although that timing may change depending on a status hearing Friday morning.