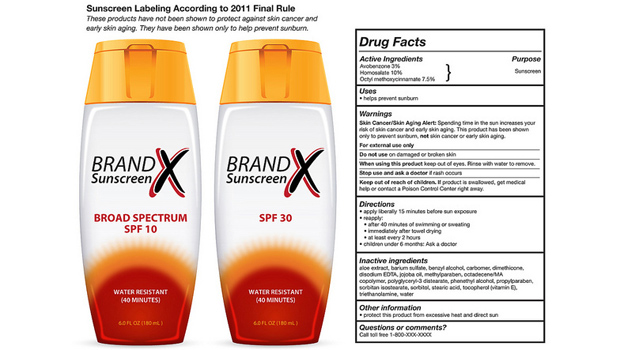 (CBS/AP) Sunscreen labeling rules set to go into effect this summer are being delayed for another six months, the Food and Drug Administration said. The label changes were aimed at reducing confusion surrounding how much protection a consumer actually gets from applying sunscreen, but the FDA bowed to an industry request for more time.

The FDA ordered changes to sunscreens last summer, CBS News reported, and at the time gave manufacturers a year - until this June - to get revised bottles on the shelf.

The changes were aimed at  helping consumes finally distinguish which brands protected against both sunburn-causing ultraviolet B (UVB) rays and the deeper-penetrating ultraviolet A (UVA) rays linked to skin cancer and premature aging. Sunscreens also couldn't claim to be waterproof or sweatproof, only water- or sweat-resistant. Those sunscreen labels must also carry a time limit of how long a user can expect protection while swimming or sweating, so consumers know how often they need to reapply.

But sunscreen manufacturers said they were having a hard time meeting the deadline. And Friday, the FDA said it would give major sunscreen makers until December - beyond sunbathing season in most of the country - to make the changes. Smaller companies will have even longer, until December 2013.

"The FDA took a major step backwards today and as a result, more consumers will likely get burned this summer," said Sen. Jack Reed, D-R.I., who had long urged the FDA to tighten its regulation of sunscreens.

FDA officials worried that holding companies to the original deadline might lead to a temporary shortage of some types of sunscreen this summer, spokeswoman Shelly Burgess said in an email. Still, the FDA said companies could go ahead and put the new relabeled bottles on store shelves as soon as they're ready - and encouraged them not to waste time.

There is a mix already in stores, as some companies have found it easier to re-label certain brands and bottles than others, said Farah Ahmed of the industry's Personal Care Products Council.

Neither she nor the FDA could estimate how many of sunscreens with the new consumer-friendly labels have made it to the market so far.

Ahmed, who chairs the council's sunscreen task force, said sunscreens aren't having to be reformulated as a result of new testing requirements from the FDA's pending rules. The real problem was the time it takes to revise package labeling, especially on smaller packages that now will have to fit extra information about just what protection is offered, she said.

Here's what consumers should be on the lookout for in a sunscreen aisle:

And experts say to avoid direct sun between 10 a.m. and 4 p.m. or to cover up. Even if you're conscientious about sunscreen, it's easy to miss a spot.