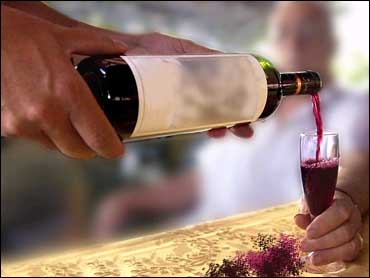 (CBS) Think sunscreen is the only way to prevent sunburn? A new study suggests there's another way besides a tube of sunscreen - and it can be found at your nearest grocery or liquor store.

Spanish scientists discovered that grapes contain compounds that block chemical changes in the body associated with causing skin damage. These compounds, known as flavonoids, are also found in red wine.

Is it time to ditch the bottle of sunscreen for a bottle of cabernet?

Not hardly. But the flavonoids help prevent the skin from forming "reactive oxygen species." It's these ROSs that react with UV rays to destroy cells and cause sunburn. The study was published in the May 11 issue of the Journal of Agricultural and Food Chemistry.

"This study supports the idea of using these products to protect the skin from cell damage and death caused by solar radiation," study director Dr. Marta Cascante, a biochemist at the University of Barcelona, said in a written statement. What about for those who don't like to booze? The authors say eating grapes is just as effective.

Ultraviolet A and B radiation has been linked to skin damage like sunburn, wrinkles, and skin cancer.

Cascante said in a written statement that these "encouraging results should be taken into consideration" to develop new skincare products.

Another chemical in wine, resveratrol, has been associated with lowering levels of bad cholesterol and protecting the blood vessels' linings. A recent study even suggested red wine is "exercise in a bottle" because it staved off the detrimental effects of inactivity in rats.

The number of new COVID-19 cases in the U.S. rose Wednesday for a third straight day, with more than 62,000 new cases reported.