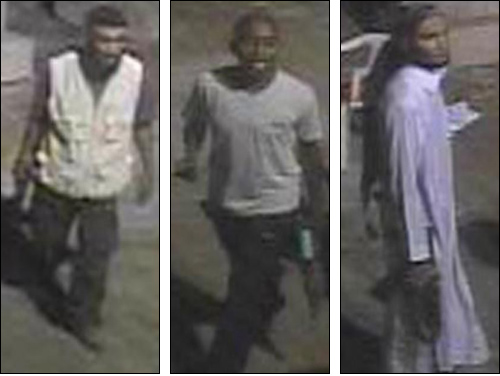 The FBI has posted new pictures of suspects wanted in the investigation into the Benghazi consulate attack last September.

On Wednesday, the bureau posted on their website surveillance photos of three men, one of which appears to be holding a rocket launcher. The FBI says that these individuals were on the grounds of the U.S. Special Mission in Libya when it was attacked on September 11, 2012. Four Americans, including U.S. Ambassador to Libya Chris Stevens, were killed in the attack.

"These individuals may be able to provide information to help in the investigation," the statement says.

Much of what happened the night of the attack, and the events leading up to it, is still hazy to the public. CBS News correspondent Sharyl Atkisson reported Wednesday the attorney for a whistleblower from the State Department is seeking permission for her client to provide a testimony, but little is known about who that whistleblower is and what he or she knows.

The investigation has also been a topic of scrutiny by Republican lawmakers, who recently released an interim report criticizing former Secretary of State Hillary Clinton and the Obama Administration's handling of the incident before and after it occurred. The lawmakers claim the White House misled the media on what they did and didn't know about extra requests for security at the site and claim Sunday show talking points were altered to cover the administration's mistakes. White House spokesperson Jay Carney called the report "partisan."

The FBI statement also asks the people of Libya and around the world to provide any information they have on the suspects or the attacks.