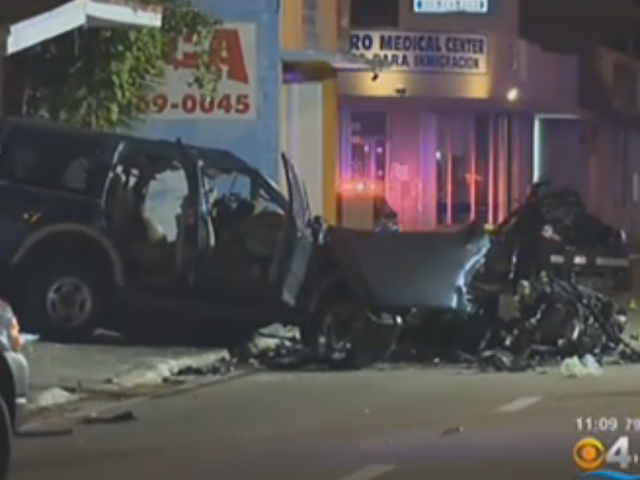 MIAMI A car that was allegedly drag racing in Miami crashed into an SUV carrying four members of the same family over the weekend, killing three people, including a father and son, and injuring the man's wife and the couple's other child.

According to Miami Police Department Detective Willie Moreno, a Toyota Scion was drag racing against a Chevy Impala and another vehicle on the eastbound side of Flagler Street just before 2 a.m. Saturday, CBS Miami reported. The cars were reportedly traveling at up to 100 miles per hour when the Scion lost control and swerved into westbound traffic, slamming into the Ford Expedition carrying the family.

Jose Serrano, 43, died at the scene, while his son, 15-year-old German Serrano, died at the hospital, investigators said. Carmen Otra, 42, and the couple's other son, 12-year-old Gabriel Serrano, are in critical condition at Jackson Memorial Hospital.

The driver of the Scion, 19-year-old Alejandro Hernandez, and his passenger, 20-year-old Ivan Rodriguez Jr., were ejected from the car upon impact, the Miami Sun Sentinel reported. Rodriguez died at the scene, while Hernandez was hospitalized in critical condition.

Detectives are searching for two other vehicles that witnesses said were also speeding.