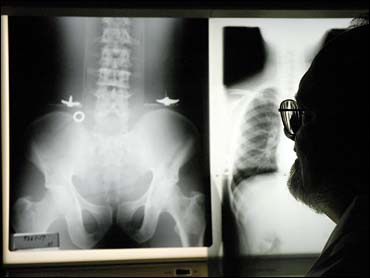 Eastman Kodak Co. is rolling out a higher-speed X-ray film that can halve a patient's exposure to radiation.

The higher speed could mean less blurring and fewer retakes for people who get the shakes around the doctors.

It is the first X-ray film in 20 years to offer a 50 percent or better drop in radiation dosage, the company said.

The new product could help the world's biggest film manufacturer squeeze profits from its film-based business, which is shrinking as photography switches over to digital technology.

Tested this winter at children's hospitals in Kentucky and South Carolina, the 800-speed, general-purpose medical film is being shipped this month to hospitals, clinics and doctors' offices around the United States and Canada.

Phillip Bunch, a medical physicist at Kodak, said the film he invented with chemist Robert Dickerson might be especially beneficial for hospital technicians and long-term patients, particularly younger ones, in need of frequent X-rays.

Bunch said hospitals will save money because their expensive X-ray tubes will last longer and they would need fewer retakes.

Radiation dosages from X-rays have plummeted so much in the 110 years since German physicist Wilhelm Roentgen discovered the rays.

The risk of developing cancer from a chest X-ray has been calculated at around 1 in 350,000, and would drop to 1 in 700,000 with this new film, said Dr. G. Donald Frey, professor of radiology at the Medical University of South Carolina in Charleston.

But Frey said some contend there is no evidence that radiation is risky at the current low levels. That could affect how many hospitals switch to higher-speed film.

Americans get an average of about 20 times more radiation from background sources — from the ground, space and even their own bodies — than they get from an X-ray, Frey said.