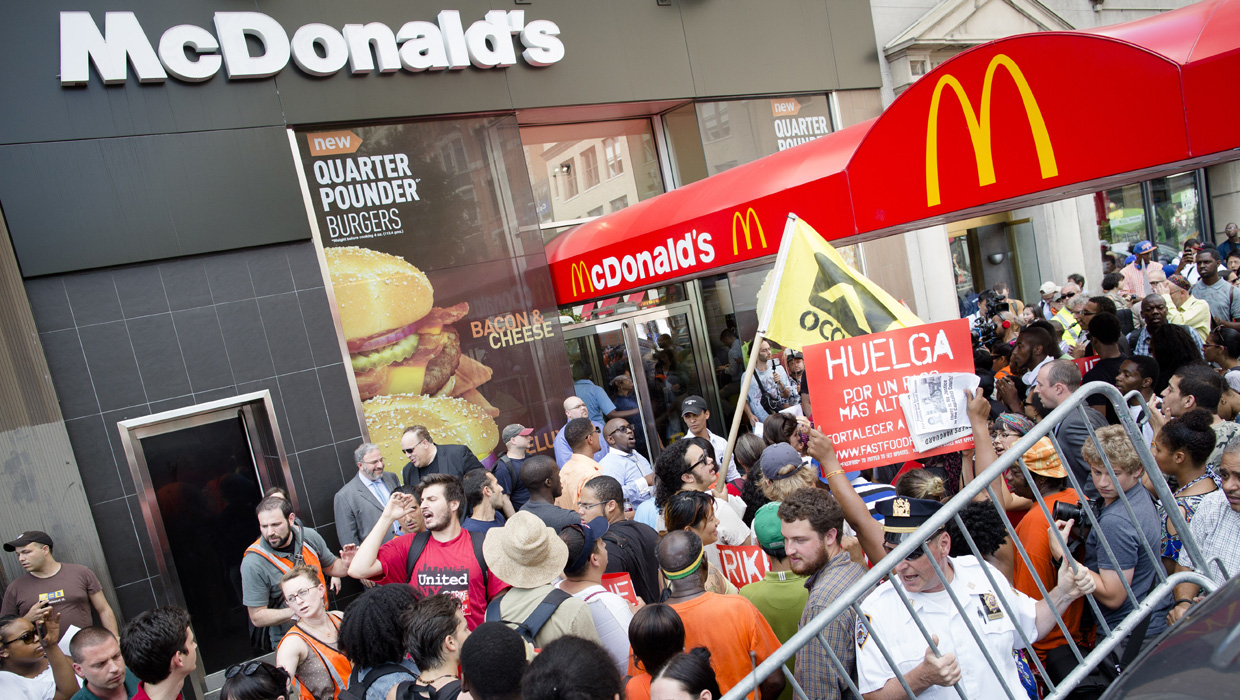 (MoneyWatch) A coalition of labor, religious and other groups are calling for a nationwide strike of fast-food employees on August 29.

The campaign, building on a flurry of one-day work stoppages this year at franchises around the U.S., highlights the efforts by unions to enlist workers in the cause and heighten the impact of the strikes. Labor supporters say that fast-food workers are poorly paid and that their low wages subsidize the profits of multinational corporations.

But many fast-food restaurant owners and other critics of the strikes say that profit margins at franchise are so thin that higher wages would put the companies out of business, costing workers their jobs.

The call for a strike came this week from a public relations agency that counts both the Service Employees International Union and United Food & Commercial Workers as clients. Both labor groups are among dozens of local and national religious, political, and union groups supporting the call for strikes. Last month, the same groups supported walkouts in some fast-food restaurants across seven cities. Others that have supported the event are the United Auto Workers, the Presbyterian Church USA, individual churches and synagogues like St. John's Catholic Church of St. Louis, and some members of the Congressional Progressive Caucus, including Minnesota Congressman Keith Ellison.

The groups are calling for a minimum wage of $15 an hour for fast-food workers, along with more protections for employees wishing to unionize. According to the U.S. Bureau of Labor Statistics, the average hourly wage last year for the nation's roughly 505,000 fast-food cooks was $9.03 an hour, which amounts to $18,780 per year. The 2.9 million food preparation and serving workers had an average hourly wage of $9, or annual income of $18,720.

For many fast-food employees, even those low wages overstate their pay. The annual wage estimates assume full-time employment of 2,080 hours a year, or 40 hours a week, for a full 52 weeks. Many franchises limit workers to working part-time, which keeps them from qualifying for health care and other benefits.

The groups pushing for a strike note that fast food is a $200 billion a year industry, with enormously well compensated CEOs. Industry leader McDonald's (MCD) had total revenues of $27.6 billion and profits of $5.5 billion last year.

By contrast, pro-business organizations like the Employment Policies Institute -- a PR front group created by conservative advocate Richard Berman -- rightly point out that many fast-food operations are operated by independent franchise owners who operate under tight profit margins.

Pointing to a 2010 Deloitte study for the National Restaurant Association, EPI claims that "[t]he typical fast-food restaurant fitting McDonald's profile spends 30 to 35 percent of its income paying labor costs." That is only true for "multi-unit franchise-operated" establishments, which might describe a restaurant operating company that owns a string of locations. For a single unit franchisee, salaries and wages ranged from 22 percent to almost 35 percent of income, including management and employee benefits.

As a comparison, full-service restaurants with an average check of less than $15 per person had labor costs of from 28 percent to just over 39 percent. That figure doesn't include tip income generally unavailable to fast-food workers.

Franchisees also pay significant amounts to the central corporation. McDonald's, for instance, charges franchise owners 4 percent of gross sales as well as rent. Owners are often required to buy their good and supplies from the company, eliminating competitive pressures that could lower expenses. Food and beverage costs at multi-unit franchise-operated restaurants ranged from 21 percent to 36 percent of income, with a median cost of 34.6 percent of revenue. Franchisees also may have to pay a percentage of sales for advertising.

In other words, the corporations that back fast-food restaurants add significant costs to franchisees' operations. McDonald's makes almost a third of its annual revenue from franchisees. So even if only a minority of the operations are directly owned and run by the big companies, the low wages that many of the franchisees claim they need to make a profit effectively subsidize the global corporation.