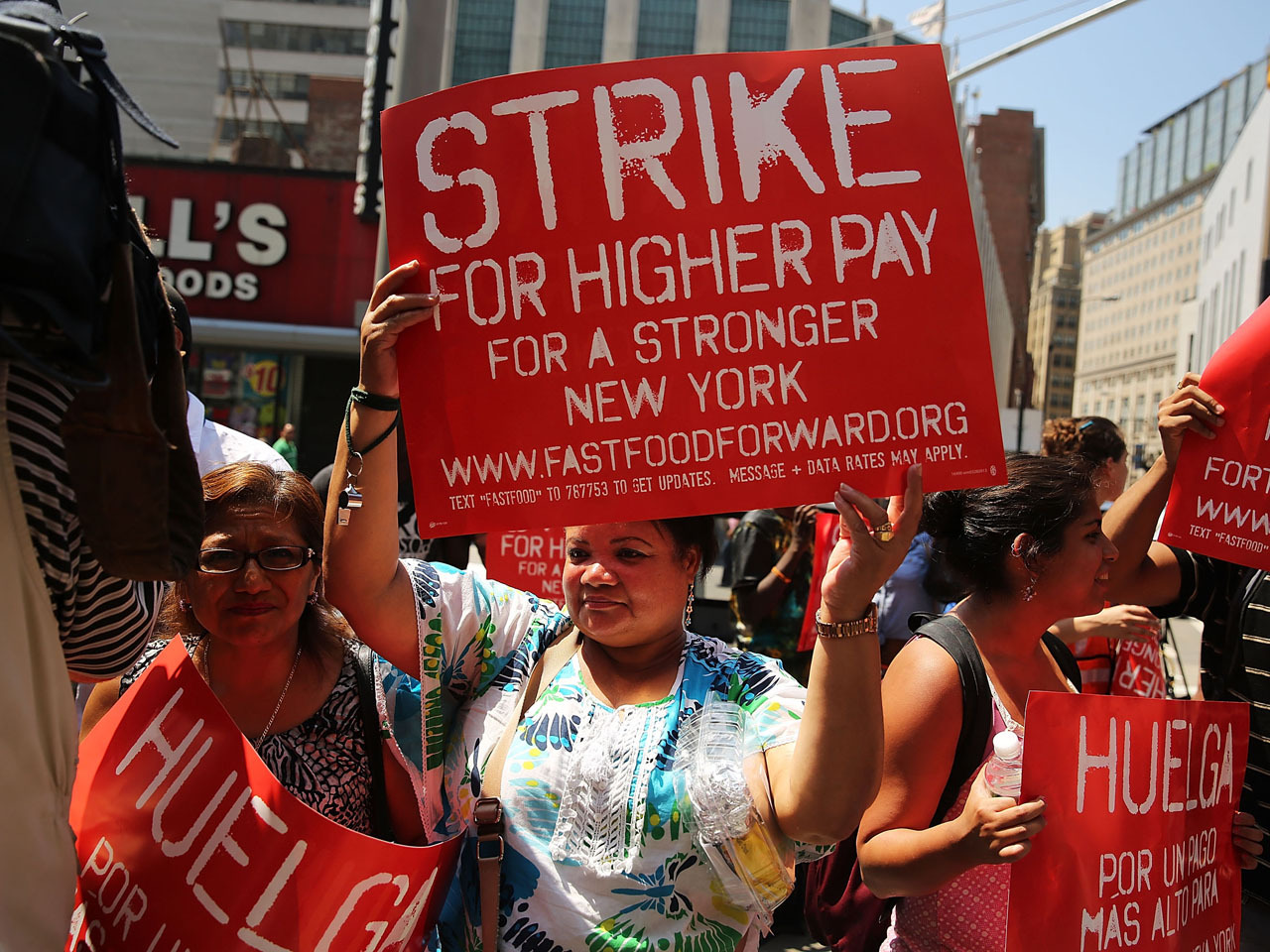 (MoneyWatch) Fast-food workers in a number of locations across seven cities plan to walk off the job today in protests over low wages. The employees, many of whom are paid the federal minimum wage of $7.25 an hour, are demanding $15 an hour, while many say they also want union representation.

The strikes, supported in part by existing labor unions like the Service Employees International Union (SEIU), are taking place in Chicago; Detroit; Flint, Mich.; Kansas City, Mo.; Milwaukee; New York; and St. Louis at various Burger King, Domino's, KFC, McDonald's and Wendy's franchises. Some data show that consumers are increasingly confident about the economy. Still, many workers are on the edge, receiving low pay and no benefits.

"For decades, Burger King restaurants have provided an entry point into the workforce for millions of Americans, including many of the system's franchisees who began their careers working at local Burger King restaurants," the company said in a statement. It also noted that individual franchise owners oversee employee compensation.

"We're proud that Wendy's provides a place where thousands of people with different backgrounds and education levels can enter the workforce, gain life skills, and advance through their own initiative and abilities," a Wendy's spokesman said.

Although the labor unrest has to date has remained fairly small in scale, some experts think it has the potential to grow much larger. When people become desperate, they may see little risk in taking action. For strikers, the goal is to pressure companies that have ridden low wages to new heights of profitability to reconsider their business models.

Companies have two basic ways of increase their profits to shareholders: grow revenue or reduce costs. Keeping a tight control on costs has become an imperative in corporations since the 1980s, when companies and Wall Street started to realize how much profit was lost in waste.

But aggressive cost control, coupled with productivity gains and egged on by public policy, has decoupled median household income from growth in productivity and per-capita GDP for more than 20 years. Even as the wealthiest grew ever richer, most of the country lost ground when taking inflation into account.

Just since the recession that officially ended in 2009, most Americans lost 55 percent of their wealth. About 80 percent of adult Americans "struggle with joblessness, near poverty or reliance on welfare for at least parts of their lives," according to a recent AP poll.

For those earning around the minimum wage, the struggle is constant. Someone making $7.25 an hour will gross $15,080 for 52 weeks of work a year, assuming that the person can get 40 hours of week. Employers of low-wage workers are frequently restricting the number of hours employees can work, keeping them on technically part-time to avoid the cost of benefits that would be mandated for full-time.

Put differently, in Flint, an economically depressed city in a state with a $7.40 minimum wage, an hourly worker at the low end is making nearly 16 percent too little to get by. An adult with two children at minimum wage in the city would be below the poverty line.

Low-wage workers typically have few options when it comes to finding a higher paying job. That could spell trouble for their current employers, possibly through an increase in union activity, even as union share of the workforce hit a 97-year low recently. Labor unions are one of the organizing sponsors of the fast-food walkouts.

According to the Bureau of Labor Statistics, median weekly wages of unionized workers are 27 percent higher than those of non-union workers. Unlike manufacturing firms, fast-food operations and other service-based industries don't have the option of outsourcing cooking, selling and cleaning to other parts of the world.