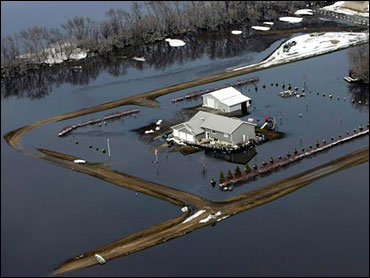 For the engineers of Fargo and Moorhead, Minn., there's bad water and good water.

The bad water is rising from the swollen Red River. The good water is flowing through the cities' drinking water and sewage treatment plants, and officials say protecting the good water from the bad is their top concern.

"If we lose water and sewer, the city is uninhabitable," said Fargo City Administrator Pat Zavoral.

Fargo has two water plants, both near the Red River. One on the south side of town treats river water and sends it to the taps of about 125,000 people in the city and nearby rural areas. Another on the north side purifies sewer water from about the same number of people and pumps it back into the river; for now, that treated sewage is being stored in lagoons so it doesn't contribute to the river's level.

The plants are protected by the dikes that skirt the river banks, which are high enough to withstand an elevation of 43 feet. The second line of defense for both plants are their own, separate dikes that are built up to 44 feet.

"The secondary protection is completely independent, and it isn't even engaged unless the primary protection fails," said Bruce Grubb, the city's manager of water, sewer and solid waste utilities. By early Sunday, the river had dropped below 40 feet.

But officials were keeping a close eye on the main dikes near the plants and asking residents to conserve water use to avoid unnecessary strain on the city's sewers and water pipes. In some parts of Moorhead, streets were flooding because river water was forcing its way from storm drains and up into the street.

Fargo-Moorhead residents don't have to look far to see the nasty outcome if the city's water infrastructure fails. In 1997, Grand Forks lost both its drinking water and sewage treatment plants to rising floodwaters. Sewage lift stations became inundated, lost power and stopped pumping, sending raw sewage streaming into the basements of many homes.

"It made a terrible situation much, much worse," recalled Joe Kalenze, the chief plumbing inspector for Grand Forks. The drinking water treatment plant in Grand Forks was flooded with river water and couldn't be brought back online until every square inch was disinfected - which took almost a month, Kalenze said. It took nearly as long to get the sewage treatment working again.

Zavoral said Fargo wants to prevent similar problems. "You have the potential for people to find themselves in unsanitary conditions, and then you have another crisis you have to deal with," he said. 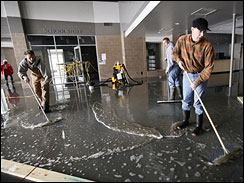 (AP Photo/Elaine Thompson)
The dike breach that swamped Oak Grove School in Fargo (left) prompted city officials to raise an alarm Sunday about preventing sewer backup. The city sent out an alert advising residents in the area to plug their sewers and monitor their basements to prevent sewage seeping into homes, though the advisory was lifted early Monday. The city had earlier instructed all voluntary evacuees to turn off their water and plug their sewer drains before they leave their homes, for the same reason.

Moorhead city officials said their wastewater treatment plant and water plant are not at risk because they are on high ground. City Engineer Bob Zimmerman said they have not gotten a lot of reports of sewage backup, but "absolutely there will be some."

Zimmerman said about one-third of the city's sewer system is at capacity and it could remain that way for some time because flood water is filling it and creating the potential for backups.

Businesses on both sides of the river were pitching in to conserve water. At Norman's, a steakhouse in Fargo, they were serving bottled water instead of tap water. At the Travelodge hotel in Moorhead, the front desk informed guests that they would not be changing sheets for multi-night guests.

In Moorhead, JoAnn Narum said her family was doing its part to honor the conservation request. She and her husband have taken in her son's family, including their two children ages 10 and 8.

"You just don't want to hurt the systems any more than you already have," Narum said. "We're just trying not to put any more pressure on it."

Narum said the family was showering about once every three days, using paper plates and throwaway silverware, avoiding use of the dishwasher and washer and flushing the toilet "when we have to."

"I'm just telling the grandkids it's just like going camping," she said. "We're just trying to have a little fun with it. It's not a fun time."