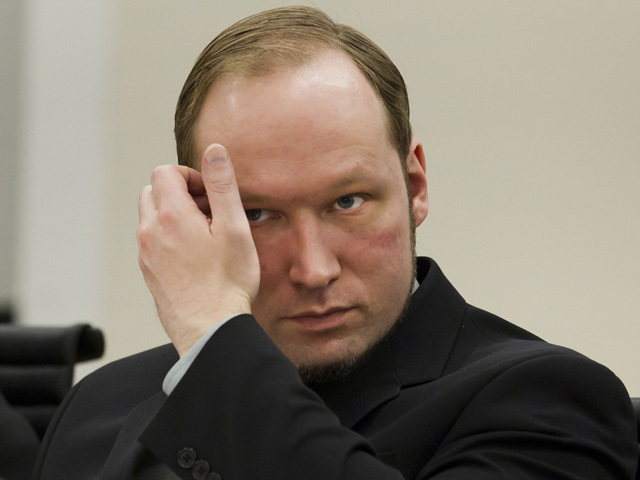 The 33-year-old self-styled anti-Muslim crusader has placed great importance on this line of argument, fearing his ideology could be undermined if he is declared insane.

Breivik, on trial for killing 77 people in a bomb-and-shooting rampage in Oslo last July, has confessed to the attacks but denies criminal guilt. He claims he acted in self-defense because his victims had betrayed their country by embracing immigration.

Defense lawyers attempted to show that while there are people who share Breivik's worldviews, they are not declared mentally ill for doing so.

"Norway is at war," Tore Tvedt, a far-right extremist who has been convicted for his published anti-Semitic statements, told the court. He noted also how victimized he has felt by Norwegian police and public authorities for his political opinions.

Although many of the witnesses echoed Breivik's political views during the hearing, all of them took care to distance themselves from his violence.

"We are a non-violent organization," said Arne Tumyr, a long-time Islam critic and leader of the organization "Stop the Islamization of Norway." But he declared that "Islam is an evil political ideology disguised as a religion."

Another witness, Ronny Alte, said that although he knows of no one in his immediate surroundings who supported Breivik's actions, "there could easily be around a hundred that I know about" on the Internet who do.

Breivik's sanity is key to the case and is still an unresolved issue. Two psychological examinations carried out before the 10-week trial started in mid-April reached opposite conclusions on whether he is psychotic or not.

If found guilty and sane, he would face 21 years in prison although he can be held longer if deemed a danger to society. If declared insane, he would be committed to compulsory psychiatric care.

Although the trial is scheduled to end on June 22, the Oslo District Court on Tuesday announced that a verdict isn't expected until July 20, or possibly even on Aug. 24, due to administrative and technological reasons as well as security issues. It declined to elaborate further.