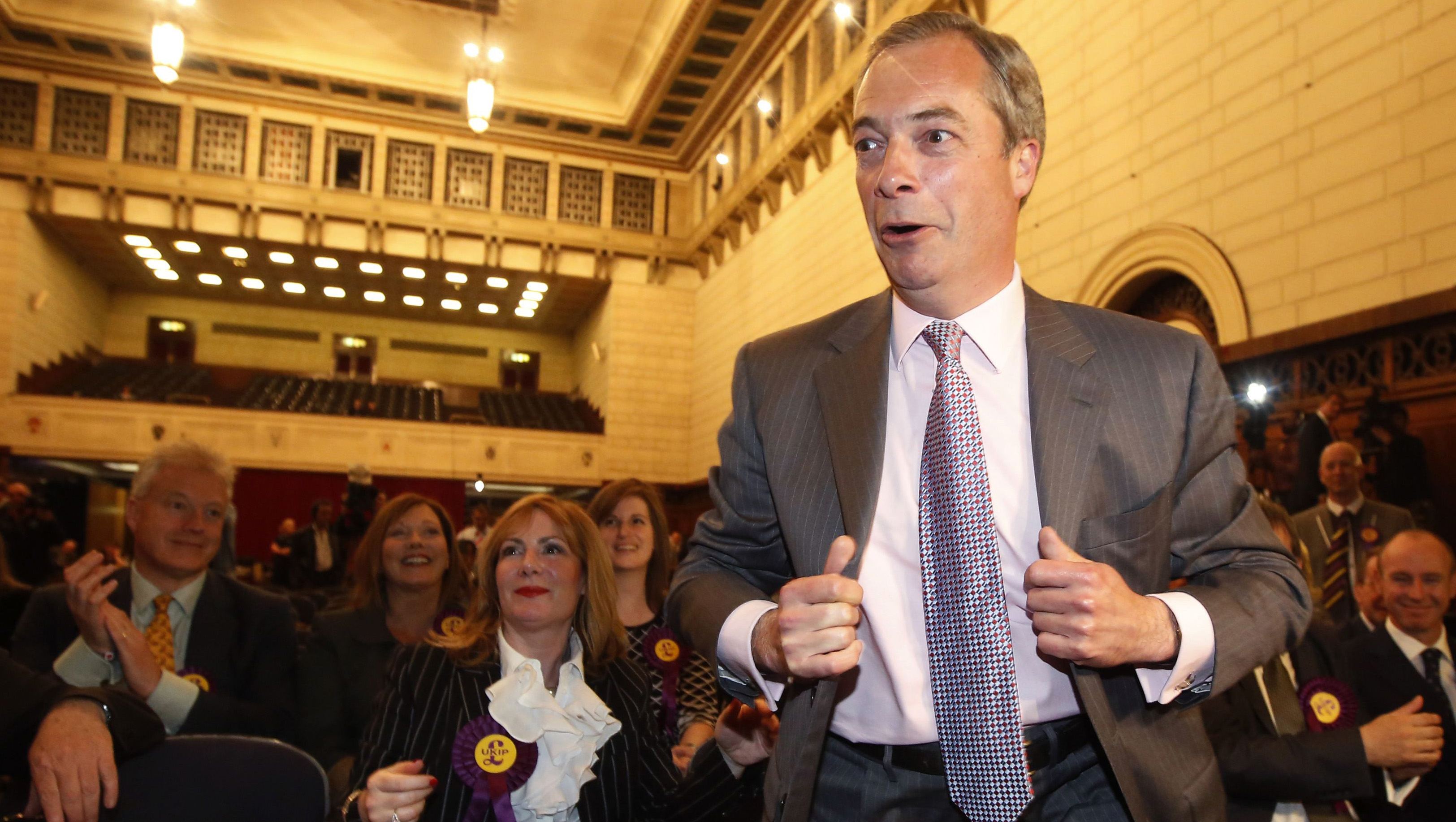 BRUSSELS - Far-right and Euroskeptic parties made sweeping gains in European Parliament elections Sunday - triggering what one prime minister called a political "earthquake" by those who want to slash the powers of the European Union or abolish it altogether.

Voters in 21 of the EU's 28 nations went to the polls Sunday, choosing lawmakers for the bloc's 751-seat legislature. The other seven countries in the bloc had already voted in a sprawling exercise of democracy that began Thursday in Britain and the Netherlands.

One of the most significant winners was France's far-right National Front party, which was the outright winner in France with 26 percent support- or 4.1 million votes.

"The sovereign people have spoken ... acclaiming they want to take back the reins of their destiny," party leader Marine Le Pen said in a statement. She called the results "the first step in a long march to liberty."

French Prime Minister Manuel Valls, in an impassioned televised speech, called the National Front win "more than a news alert ... it is a shock, an earthquake."

All of Europe will have to deal with the fallout, analysts and politicians said.

Pro-European parties "have to take very seriously what is behind the vote," said Martin Schulz of the Socialist group in parliament.

The National Front was not the only party benefiting from widespread disillusionment with the EU. Nigel Farage, leader of the fiercely Euroskeptical UKIP party, believed he was on track for a historic victory.

"It does look to me (like) UKIP is going to win this election and yes, that will be an earthquake, because never before in the history of British politics has a party that is seen to be an insurgent party ever topped the polls in a national election," he said.

The first official results announced late Sunday had UKIP at about 30 percent, some 12 percent higher than the last European elections in 2009.

In Denmark, with 95 percent of votes counted, the main government party, the Social Democrats, retained their five seats to remain the biggest party.

But the big winner in the elections was the populist, opposition Danish People's Party, which won three more seats for a total of four. A year-old party in Germany that wants that country to stop using the euro single currency reportedly won 6.7 percent of the vote.

In Greece, with a quarter of the votes counted, the leftist Euroskeptic Syriza party led with 26.49 percent. The extreme right Golden Dawn party was third with 9.33 percent.

"The problem comes when the left, the Socialists and EPP will not agree on issues," Frantescu said.

In the incoming European Parliament, he said, fringe parties will be able to exert more pressure on key topics, ranging from how liberal to make the internal European market for services or the proper mix of energy sources to which clauses should be scrapped in a proposed trade and investment agreement with the U.S.

In the Netherlands, however, the right-wing Euroskeptic Party for Freedom surprisingly dropped a seat from five to four. Its outspoken leader, Geert Wilders, said in a statement his party looked forward to working with Le Pen in Europe, calling the National Front leader "the next French president."

In Italy, early projections indicated that the main government party, the Democrats led by Premier Matteo Renzi, had beaten off a challenge by the anti-euro 5-Star Movement of comic Beppe Grillo. The center-left Democrats were forecast to win 40 percent, while Grillo's anti-establishment movement would garner 22.5 percent.

Despite the gains, unity may be hard to find in the fractured Euroskeptic camp.

Le Pen has said she will work with Wilders' party but Britain's Farage has ruled out cooperating with both those parties, which have stridently anti-immigrant platforms.

"We won't work with right-wing populists," Alternative for Germany's leader Bernd Lucke also said after the vote, insisting his party was generally in favor of the EU despite its rejection of the common currency.

Grillo in the past has said his movement wouldn't ally itself with Le Pen's party, claiming the 5-Stars have a different "DNA."

"One thing remains certain: EPP is the responsible political force in Europe, which keeps Europe open," he said.

The European Parliament estimated turnout was narrowly up from the last election in 2009, at 43.1 percent, reversing years of declining turnouts.

Voters also put new parties in the European Parliament, with preliminary results showing that Sweden elected the first lawmaker from a feminist party and the Dutch returned one representative for the Party for the Animals.

"You know that we have created history don't you? We inspire the world. This is the force of love!" the Feminist Initiative's main candidate, Soraya Post, proclaimed in front of cheering supporters in Stockholm.

Newborn saved after mother gives birth and dies under earthquake rubble
Thanks for reading CBS NEWS.
Create your free account or log in
for more features.
View CBS News In
CBS News App Open
Chrome Safari Continue
Be the first to know
Get browser notifications for breaking news, live events, and exclusive reporting.