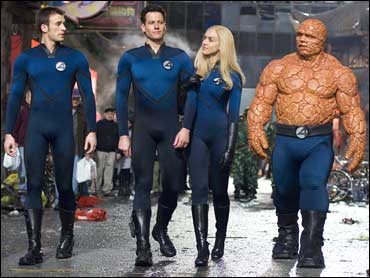 Hollywood's superhero foursome is still fantastic at the box office.

The 20th Century Fox sequel "Fantastic Four: Rise of the Silver Surfer" debuted as the No. 1 weekend flick with $57.4 million in sales, slightly surpassing the $56.1 million opening of "Fantastic Four" two years ago, according to studio estimates Sunday.

Among other new wide releases, a favorite teen detective had trouble finding an audience as the Warner Bros. mystery "Nancy Drew" premiered with a so-so $7.1 million to finish at No. 7.

The previous weekend's No. 1 movie, George Clooney and Brad Pitt's "Ocean's Thirteen," fell to No. 2 with $19.1 million. The Warner Bros. casino caper raised its 10-day total to $69.8 million, putting it on track to become the franchise's third $100 million hit.

Despite the big opening for "Fantastic Four," Hollywood revenues slipped for the third straight weekend. The top 12 movies took in $138.8 million, down 4 percent from the same weekend last year, when "Cars," "Nacho Libre" and "The Fast and the Furious: Tokyo Drift" led with a combined $86 million.

The industry had a blockbuster May with "Spider-Man," "Shrek" and "Pirates of the Caribbean" sequels, but big films are not holding their audiences after huge opening weekends.

After a surge early this year, attendance has slipped to just a fraction ahead of 2006, diminishing prospects of a record summer that many analysts had predicted.

"We've seen our advantage over last year slowly being chipped away," said Paul Dergarabedian, president of box-office tracker Exhibitor Relations. "A lot of films are doing what these big summer movies do, open big and drop off fast."

The studio and filmmakers toned down the action so the sequel could earn a PG rating to broaden the audience to family viewers. The first "Fantastic Four" was rated PG-13.

"A lot of the superhero comic-book movies are sort of geared toward being darker and edgier. We think 'Fantastic Four' is a more family friendly group of superheroes," said Chris Aronson, senior vice president for distribution at 20th Century Fox. "We wanted to make sure to cast a wide net and go after the family audience, and it worked."