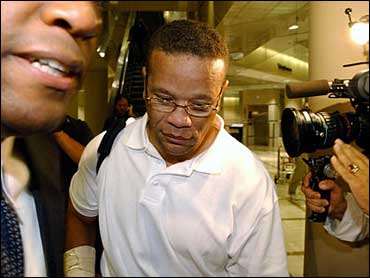 Tears and prayers flowed at a memorial service for five family members shot to death in their home, but the father and husband of the victims, the only suspect in their killings, did not attend.

Vincent Brothers, 41, flew to Los Angeles International Airport with his lawyer Friday night. As reporters trailed him, he hid his face and broke down in tears as he got into a waiting car.

He was believed to be heading back to Bakersfield, a Central Valley town 100 miles north of Los Angeles.

Brothers, an elementary school vice principal, turned himself in to authorities Wednesday in North Carolina, where his mother lives, but was released hours later because Bakersfield police said they lacked enough evidence to seek a formal arrest warrant.

"He returns to Bakersfield as a grieving father, husband and son-in-law," his attorney, Curtis Floyd, read from a prepared statement Friday. "Mr. Brothers' main priority at the current time is to make funeral arrangements for his family and to bid farewell to his loved ones."

Bakersfield police Capt. Neil Mahan said Brothers is still considered the only "potential suspect" in slayings earlier this week, but police are investigating whether anyone else may have had a motive for the killings.

On Friday, Bakersfield authorities searched several undisclosed locations in Ohio but wouldn't say why. Police earlier said information from that state had led to Brothers' release.

Floyd said that Brothers was not in Bakersfield at the time of the murders. "The police know where he was during that time," he said.

On Friday evening, about 250 people gathered for at a church a few blocks from the victims' home.

"I share with the family the grief of the entire city of Bakersfield," Mayor Harvey Hall said.

Earnestine Harper was remembered as a strong-willed community activist. "She was not afraid to stand up against wrong for justice," City Councilwoman Irma Carson said. "We know she fought a good fight. God has called her home."

Joanie Harper's sister wept as she spoke of the moment she learned about the killings.

The victims were last seen at church last Sunday; their bodies were discovered Tuesday. Authorities said they were shot to death but also had been stabbed. Police still were still seeking the murder weapons.

Police earlier searched Brothers' apartment and a storage unit he used. They also seized a computer from the storage facility and impounded Brothers' 1994 Chevrolet truck and a 2003 Mercedes.

According to an officers' affidavit, the search didn't turn up murder weapons, blood evidence or clothing linked to the crime scene. Authorities were searching for a .22-caliber gun and a "stabbing weapon," the document said.