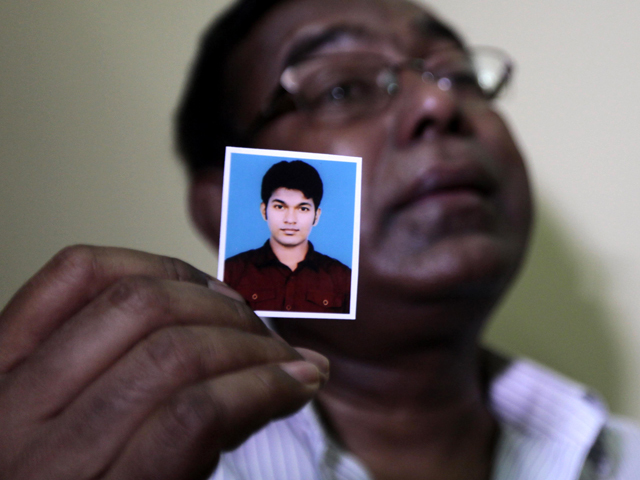 DHAKA, Bangladesh Just a few hours before he was arrested in an FBI sting operation, a Bangladeshi man accused of trying to blow up New York's Federal Reserve building calmly spoke via Skype with his parents back home and updated them on his studies, his family told The Associated Press.

They were stunned Thursday morning to find out that the banker's son from a middle-class Dhaka neighborhood was accused of trying carry out a terror attack. They denied he could have been involved.

"My son couldn't have done it," his father, Quazi Ahsanullah, said weeping.

"My brother may have been a victim of a conspiracy," said Fariel Bilkis.

The FBI arrested 21-year-old Quazi Mohammad Rezwanul Ahsan Nafis on Wednesday after he tried to detonate a fake 1,000-pound car bomb, according to a criminal complaint.

A U.S. official told CBS News that Nafis considered targeting President Obama before settling on the Federal Reserve building just blocks from the World Trade Center site but those considerations never got beyond the discussion stage.

On "CBS This Morning" Thursday, CBS News senior correspondent John Miller reported that Nafis had made statements that he was in contact with a Qaeda network before he arrived in the United States in January. But there was no allegation that Nafis actually received training or direction from the terrorist group.

In conversations recorded by the FBI, Miller reports Nafis allegedly said he admired the radical U.S.-born cleric Anwar al-Awlaki, who inspired the "underwear bomber," Umar Farouk Abdulmutallab, and the accused Fort Hood shooter, Maj. Nidal Hasan. Even after Awlaki was killed in a drone strike, his magazine, called Inspire, supplied Nafis with the outlines for his plot.

Prosecutors said Nafis traveled to the U.S. on a student visa in January to carry out an attack.

Hours after his arrest, Bangladeshi detectives were at his family's three-story home in the Jatrabari neighborhood in south Dhaka.

"We are just collecting details about Nafis from his family," one officer said, speaking on condition of anonymity because he was not authorized to speak to the media.

Nafis' family said he was incapable of such actions and he went to America to study business administration, not to carry out any attack.

Nafis was so timid, he couldn't even venture out onto the roof alone, his father said. "He used to take someone to go the roof at night. I can't believe he could be part of it (the plot)."

"He is very gentle and devoted to his studies," he said, pointing to Nafis' time studying at the private North South University in Dhaka.

However, Belal Ahmed, a spokesman for the university, said Nafis was a terrible student who was put on probation and threatened with expulsion if he didn't bring his grades up. Nafis eventually just stopped coming to school, Ahmed said.

Ahsanullah said his son convinced him to send him to America to study, arguing that with a U.S. degree he had a better chance at success in Bangladesh.

"I spent all my savings to send him to America," he said.

University spokeswoman Ann Hayes told The Associated Press that Nafis requested a transfer of his records in July and the university complied, though she couldn't say where the records were transferred.

Mohammad Arif Akunjee, a childhood friend, said Nafis wanted to be a businessman.

Just a few hours before his arrest, Nafis talked to his mother over Skype to update her on his plans, Bilkis said.

"My brother told my mother that he was doing well in studies in the U.S. and was transferring to a college in New York," said his sister.

Early Thursday, a relative living in Switzerland called to tell the family Nafis had been arrested.

"We woke up with this terrible news. We just can't believe it," she said.

Ahsanullah called on the government to "get my son back home."

Bangladesh does not have the same record of involvement in global terrorism as Pakistan, with which it once formed a nation before winning its independence in 1971. At least one Bangladeshi was among those detained by the U.S. at Guantanamo Bay Naval Base in Cuba.