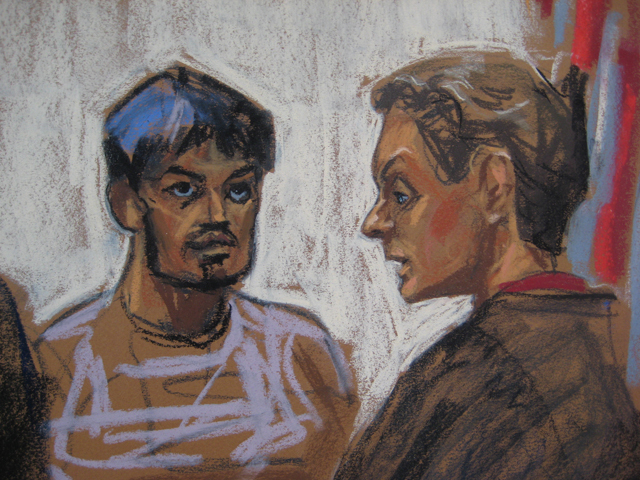 NEW YORK A Bangladeshi man who came to the United States to wage jihad was arrested in an elaborate FBI sting on Wednesday after attempting to blow up a fake car bomb outside the Federal Reserve building in Manhattan, authorities said.

Before trying to carry out the alleged terrorism plot, Quazi Mohammad Rezwanul Ahsan Nafis went to a warehouse to help assemble a 1,000-pound bomb using inert material, according to a criminal complaint. He also asked an undercover agent to videotape him saying, "We will not stop until we attain victory or martyrdom," the complaint said.

Agents grabbed the 21-year-old Nafis -- armed with a cellphone he believed was rigged as a detonator -- after he made several attempts to blow up the bomb inside a vehicle parked next to the Federal Reserve, the complaint said.

CBS News correspondent John Miller reported that it is possible authorities may take other people into custody in this case. They are looking at least five other people who are associates of Nafis. If Nafis is convicted in this case, he could face life in prison.

Authorities emphasized that the plot never posed an actual risk. However, they claimed the case demonstrated the value of using sting operations to neutralize young extremists eager to harm Americans.

"Attempting to destroy a landmark building and kill or maim untold numbers of innocent bystanders is about as serious as the imagination can conjure," said Mary Galligan, acting head of the FBI's New York office. "The defendant faces appropriately severe consequences."

Nafis appeared in federal court in Brooklyn to face charges of attempting to use a weapon of mass destruction and attempting to provide material support to al Qaeda. Wearing a brown T-shirt and black jeans, he was ordered held without bail and did not enter a plea. His defense attorney had no comment outside court.

The defendant "reported having connections" to al Qaeda, prosecutors said. But there was no allegation that he received training or direction from the terrorist group. Nafis was living in Queens.

Prosecutors say Nafis traveled to the U.S. in January to carry out an attack. In July, he contacted a confidential informant, telling him he wanted to form a terror cell, the criminal complaint said.

In further conversations, authorities said Nafis proposed several spots for his attack, including the New York Stock Exchange -- and that in a written letter taking responsibility for the Federal Reserve job he was about to carry out, he said he wanted to "destroy America." Other communications took place through Facebook, the complaint said.

A source told CBS News' Pat Milton that the arrest was the result of a several-month investigation, and that the suspect is from Jamaica, Queens, in New York. CBS News has also learned that Nafis was enrolled at Southeast Missouri State University for the spring semester earlier this year and that he was pursuing a degree in cyber security; he is not currently enrolled there.

New York City Police Commissioner Raymond Kelly said Nafis came to the U.S. on a student visa. He said the man came under the guise of going to school in Missouri but was really plotting an attack. Kelly said the city remains at the top of the terrorist target list.

The bank in New York, located at 33 Liberty St., is one of 12 branches around the country that, along with the Board of Governors in Washington, make up the Federal Reserve System that serves as the central bank of the United States. It sets interest rates.

The Fed is also home to "the world's largest accumulation of gold," according to the bank's website. Dozens of governments and central banks store a portion of their gold reserves in high-security vaults deep beneath the building. In recent years, it held 216 million troy ounces of gold, or more than a fifth of all global monetary gold reserves, making it a bigger bullion depository than Fort Knox.

Kelly said the plot demonstrates the continued threat of terrorism against the city.

"Whether al Qaeda operatives like Iyman Faris or those inspired by them like Jose Pimentel, terrorists have tried time and again to make New York City their killing field," said Kelly in a statement. "We're up to 15 plots and counting since 9/11, with the Federal Reserve now added to a list of iconic targets that previously included the Brooklyn Bridge, the New York Stock Exchange, and Citicorp Center. After 11 years without a successful attack, it's understanding if the public becomes complacent. But that's a luxury law enforcement can't afford."

The FBI has come under criticism for similar sting operations recently. Back in September, Adel Daoud was arrested in a sting operation and charged for trying to blow up a Chicago bar with an explosive. According to the U.S. attorney's office, the device was harmless and that the public was not in danger. In court documents, Daoud told an undercover agent the reason for the attack was that America was at war "with Islam and Muslims." Daoud's attorney said that his client was encouraged by federal agents to take part in terrorism.

Four men were convicted in 2009 in a plot to bomb synagogues and shoot down military planes with missiles -- a case that began after an FBI informant was assigned to infiltrate a mosque in Newburgh, about 70 miles north of New York City. The federal judge hearing the case said she was not proud of the government's role in nurturing the plot.

In 2004, a Pakistani immigrant was arrested and convicted for a scheme to blow up the subway station at Herald Square in Midtown. His lawyers argued that their client had been set up by a police informant who showed him pictures of Iraq abuse to get him involved in an attack against civilians.

So how often is the FBI do these stings? In the universe of cases since 9/11, there have been about 300 arrests in terrorism cases, reported Miller. Of that, about 100 have involved plots. And of those, about 25 of them or so have involved actual stings where people carried what they believe were real bombs to launch attacks. So a lot more often than the general public is really aware.