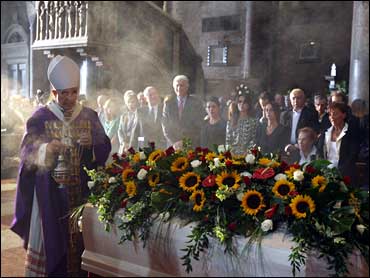 Luciano Pavarotti's voice rang out a final time Saturday inside Modena's cathedral, as a recording of the great tenor singing with his father highlighted a funeral attended by family, dignitaries and close friends.

Guests gave the tenor one last standing ovation when "Panis Angelicus," the 1978 duet Pavarotti sang with his father, Fernando, inside Modena's Duomo came to a close.

The duet was one of the most poignant moments of the funeral, which began with a moving rendition of Verdi's "Ave Maria" and a message of condolences from Pope Benedict XVI saying Pavarotti had "honored the divine gift of music through his extraordinary interpretative talent."

CBS News correspondent Allen Pizzey reports that the family had hoped for a private funeral, but there was never any chance of that.

Thousands watched the invitation-only service from a huge television screen erected in Modena's main piazza, where a recording of the tenor's most famous works had boomed out during two days of public viewing.

Italy's air force precision flying team flew over the cathedral at the end of the service, releasing red, white and green smoke in the colors of the Italian flag.

Pavarotti's white maple casket, covered in sunflowers - his favorite - lay before the altar during the service, with his wife, Nicoletta Mantovani, looking on. Sitting nearby were Pavarotti's three daughters from his first marriage.

A message from Pavarotti's 4-year-old daughter, Alice, was read out during the service as Mantovani sobbed.

"Papa, you have loved me so much, I know you will always protect me. I will hold you dear to my child's heart every tomorrow," it said.

From The 60 Minutes Archive

Pavarotti In His Prime
|

Pavarotti On His Health

Pavarotti died on Thursday in his home on Modena's outskirts after battling pancreatic cancer for more than a year. He was 71 and was beloved by generations of opera-goers and pop fans alike for his breathtaking high "Cs" and his hearty renditions of folk songs like "O Sole Mio," and popular tunes like "My Way."

Tenor Andrea Bocelli sang Mozart's "Ave Verum Corpus" while the Rossini Chorus performed hymns throughout the service, which was celebrated by Modena Archbishop Benito Cocchi and 18 other priests.

Bulgarian-born soprano Raina Kabaivanska, a fellow Modena resident who had worked with Pavarotti, cried as she sang the "Ave Maria" from Verdi's "Otello" as the ceremony began. Flautist Andrea Griminelli played the "Dance of the Blessed Spirits" from Gluck's "Orfeo e Euridice."

Cocchi said the presence of so many dignitaries at the funeral was a sign "of the esteem, of the affection and of the gratitude that universally surrounds the great artist."

But he said it was also significant how local Modenese had rendered homage to their native son, applauding out of respect when Pavarotti's casket was brought to the cathedral on Thursday for public viewing.

The applause, he said, "was not joyous as in other occasions, but intense and sincere."

"The death of Luciano Pavarotti has made us feel more impoverished," he said. "The maestro was and will always be a symbol for our city."

"Modena is known for its cappelletti (a type of tortellini), balsamic vinegar, Ferrari and Pavarotti. It's a collection of important things that Modena has given to the world," said Susy Cavallini, a 43-year-old Modena resident as she emerged Saturday from the cathedral.

The tenor was to be buried in Montale Rangone cemetery, near Modena, where members of his family, including his parents and stillborn son Riccardo, are buried.

Pavarotti's classical career, with his imposing presence, emotional depth and boyish, charming ease all adding to his technical prowess, was the stuff of opera legend. But his legacy reached beyond the opera houses to reach the masses, working with fellow opera stars and pop icons alike.

These far-from-the-opera house performances, including memorable nights under the stars at Rome's ancient Baths of Caracalla with Jose Carreras and Placido Domingo, in the "Three Tenors" concert, rescued musical art from highbrow obscurity.

Pavarotti was the best-selling classical artist, with more than 100 million records sold since the 1960s, and he had the first classical album to reach No. 1 on the pop charts.

That Pavarotti - a divorced man who had a child out of wedlock - was given public viewing and a funeral in the cathedral spurred some debate here. A Modena parish priest, the Rev. Giorgio Bellei, told Corriere della Sera that the move amounted to "profanation of the temple." Other critics noted that last year the church refused to grant a religious funeral to a paralyzed man who had a doctor disconnect his respirator.

Funeral director Gianni Gibellini said Bellei should have "kept his mouth sewn shut" and Archbishop Cocchi appeared to address the issue, saying "Pavarotti, with a faith that he never repudiated or hid and which he expressed consistently with his singing, is no stranger in this cathedral."