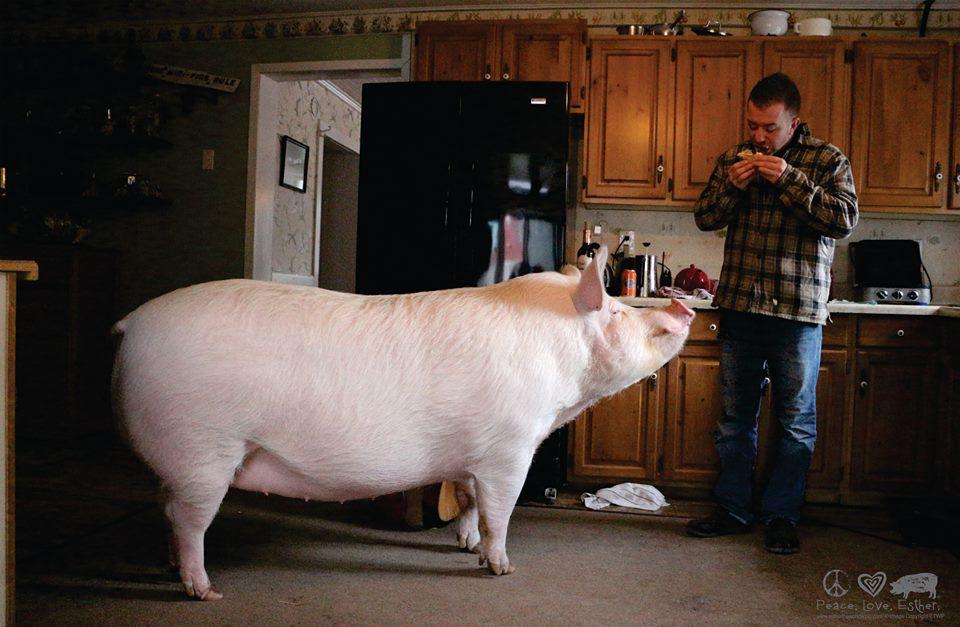 Esther the Wonder Pig is enormous. There is simply no ignoring that fact. But when Steve Jenkins of Campbellville, Canada brought her home, he did so under the impression that Esther was a micro pig.

Micro pigs, or teacup pigs as they are commonly known, are a special breed of domesticated hog which generally grow to be anywhere between 50 and 150 pounds. Often kept as pets, these small pigs are more akin to a big dog in size than they are to the much larger pigs one might find on a farm. In fact, it’s not unheard of to find teacup pigs raised in cities and even apartment buildings.

So, when a former schoolmate contacted Jenkins over Facebook to see if he would adopt her micro pig, he had no reason not to trust her.

“She wrote me one day and said she knew I was an animal lover, and did I want to adopt her mini pig,” Jenkins explains. “She said she got Esther from a breeder, and that she was already six months old, had been spayed, and wouldn’t grow any bigger than 70 pounds. I believed her because I knew her. I didn’t think she would lie to me.”

The woman, however, was very much lying. And Esther’s first trip to the vet confirmed that in no uncertain terms.

Rather than being six months old, Jenkins was informed that the little three-pound piglet in his arms was actually only around four or five weeks old at the time. What’s more, the vet quickly determined that Esther’s tail was cropped; a clear indication that she was in fact a commercial pig, not a mini pet pig at all.

Nevertheless, Jenkins and his husband Derek determined to raise her. They were, after all, animal lovers, with two dogs and two cats already to their name. Besides, how much bigger could Esther get?

“Every time our friends came over they would comment on how big she was getting and ask what we were going to do,” Jenkins told CBS News. “We always said ‘we’re wondering the same thing,’ and so she became ‘the Wonder Pig.’ Everything about Esther was a question mark in the early months.”

Well, Esther the Wonder Pig has now grown to a whopping 650 pounds and amassed a social media following equally as massive. With over 1 million followers on Facebook alone, Jenkins says she’s now reaching people around the world with some meaningful messages.

“Esther has become a real bright spot for many people, a place to come for a laugh and to forget the crazy stuff going on around us,” Jenkins explains. “We get messages from people all the time who tell us Esther helped them through a really hard time, a lady who said, ‘Thank you for showing my sons it’s OK to have two dads,’ even a man who said Esther’s photo helped his mother smile — she is suffering from dementia, and he hadn’t seen her smile for weeks. It’s really incredible.”

Steve and Derek are most proud, however, of the way Esther’s online presence is educating people about the animal welfare issues around animal products.

“People are beginning to see pigs like Esther as individuals. We try to remind people in a very gentle way that Esther was bred to be our dinner, and that this animal so many of us have fallen madly in love with, is no different than the millions of pigs like her who will never be so lucky. She really gives food a face, and for many people that’s an incredibly powerful thing,” Jenkins tells CBS News. “That’s what made us personally shun animal products, and start to learn about the animal welfare issues, environmental impacts, and health concerns that surround that animal agriculture industry. Esther has an incredible ability to connect with people in a very deep and meaningful way, and that translates to her having a very big impact on many aspects of their lives. It’s very hard to explain, but we call it ‘the Esther effect.’”

Thanks to Esther’s larger-than-life personality and a crowdfunding campaign that helped Steve and Derek raise $440,000 back in 2014, the family now lives on a 50-acre farm outside of Toronto with more than 40 animals. They call it the “Happily Ever Esther Farm Sanctuary.”