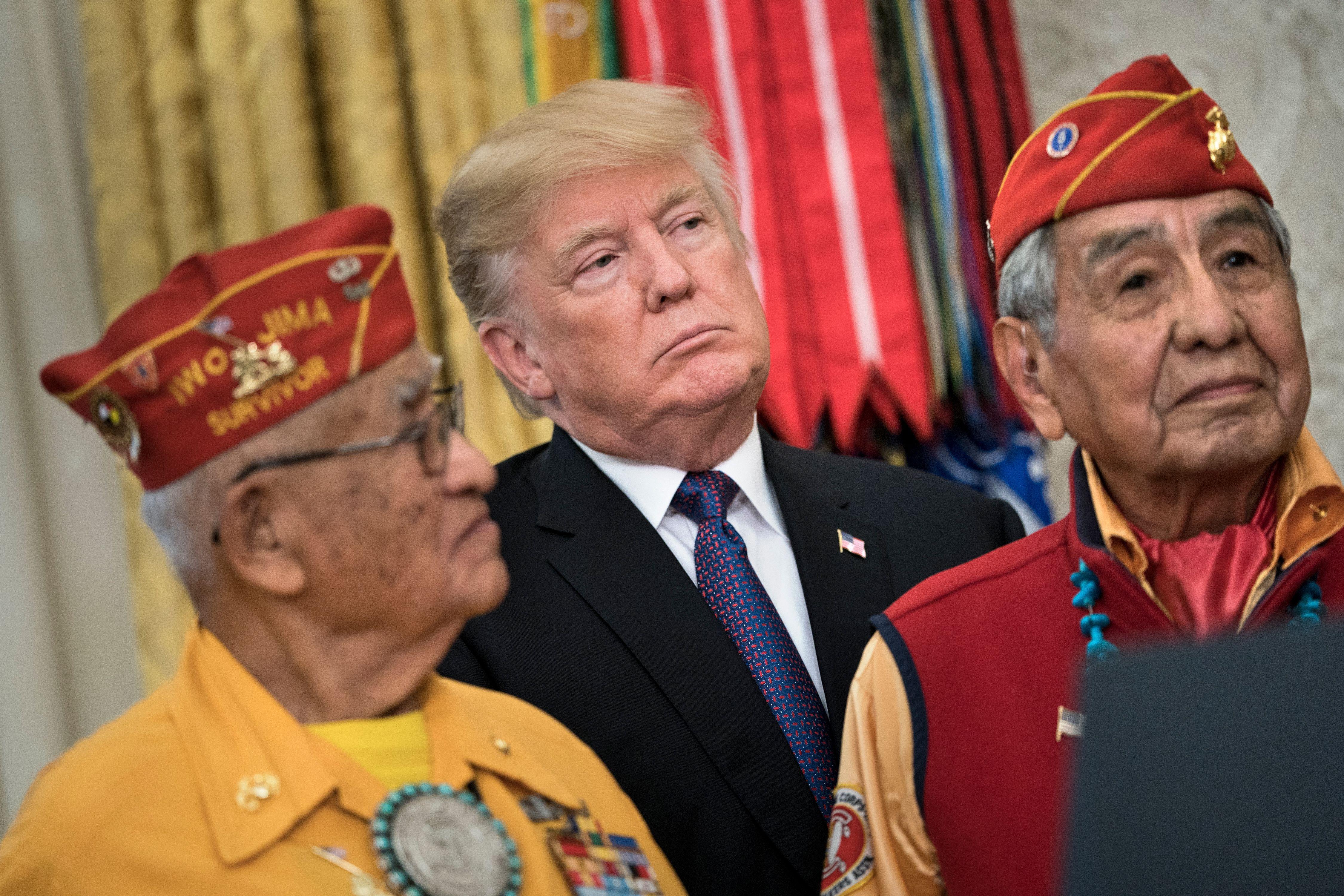 Families of Navajo war veterans who were honored Monday at the White House say they were dumbfounded that President Donald Trump used the event to take a political jab at a Massachusetts senator, demeaning their work with an unbreakable code that helped the U.S. win World War II.

Mr. Trump turned to a nickname he often deployed for Democratic Sen. Elizabeth Warren during the 2016 presidential campaign: Pocahontas. He then told the three Navajo Code Talkers on stage that he had affection for them that he doesn't have for Warren.

"It was uncalled for," said Marty Thompson, whose great uncle was a Navajo Code Talker. "He can say what he wants when he's out doing his presidential business among his people, but when it comes to honoring veterans or any kind of people, he needs to grow up and quit saying things like that."

Lupita Holiday, daughter of a code talker from St. Geroge, Utah told CBS News' Jacqueline Alemany on Monday that it appeared that the president "doesn't know the history" of the Native peoples.

Pocahontas is a well-known historical figure who bridged her own Pamunkey Tribe in present-day Virginia with the British in the 1600s. But the National Congress of American Indians says Mr. Trump wrongly has flipped the name into a derogatory term, and the comment drew swift criticism from American Indians and politicians.

Mr. Trump used an event honoring Native American veterans Monday to take a shot at Democratic Sen. Elizabeth Warren, whom he has long derided as "Pocahontas."

Trump made the comment as he stood near a portrait of President Andrew Jackson, which he hung in the Oval Office in January. Trump admires Jackson's populism. But Jackson is an unpopular figure in Indian Country because his policies led to the forced removal of American Indians out of their southern homelands.

The Navajo Nation suggested Mr. Trump's remark Monday was an example of "cultural insensitivity" and resolved to stay out of the "ongoing feud between the senator and President Trump."

Still, Begaye and relatives of Navajo Code Talkers said they're honored the story of the men recruited from the vast Southwest reservation to become Marines could be told on a national stage. Peter MacDonald, a former Navajo chairman and trained Code Talker who stood beside Mr. Trump, also took the opportunity to ask for support for a Navajo Code Talker museum. Mr. Trump obliged.

Michael Smith, a Marine whose father was a Code Talker, said most of the Code Talkers would be skeptical about going to the White House because it could be construed to mean they support a political cause.

"So, why did they go? Why were they there? He's putting them in the Oval Office to say 'You did a good job, and say hi to Pocahontas?'" Smith said. "They should be taken care of as heroes, not as pawns."

Michael Nez, whose father helped develop the code based on the Navajo language, said his father would have been upset to hear Mr. Trump's Pocahontas comment. But, as other Code Talker relatives said, his father was taught to respect the president as the commander in chief.

Helena Begaii said her 94-year-old Navajo Code Talker father, Samuel T. Holiday, declined an invitation to the White House on Monday. She said he would have a better feel for what happened once he reads the newspaper.

"I feel really sad that they didn't get treated with respect," she said.

Mr. Trump's Pocahontas comment is the latest in a long list of remarks Mr. Trump has made about people from specific ethnic and racial groups. In announcing a run for the presidency in 2015, Mr. Trump said many Mexican immigrants are rapists. He's sought to ban immigrants from certain Muslim majority nations. He's come under fire for what some said was a too-slow federal response to hurricane damage in Puerto Rico.

The president has long feuded with Warren, an outspoken Wall Street critic who leveled blistering attacks on Mr. Trump during the campaign. Mr. Trump seized on questions about Warren's heritage, which surfaced during her 2012 Senate race challenging incumbent Republican Sen. Scott Brown.

Warren said in an interview on MSNBC that, unfortunately, Mr. Trump cannot make it through a ceremony honoring heroes "without having to throw out a racial slur."

She since has released a fundraising email citing the president's own words, telling supporters that Mr. Trump has stooped to a "disgusting low."

New Mexico Sen. Tom Udall, vice chairman of the Indian Affairs committee, added: "Donald Trump's latest racist joke -- during Native American Heritage Month no less — demeaned the contributions that the Code Talkers and countless other Native American patriots and citizens have made to our great country."