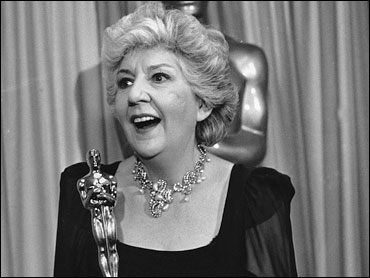 Maureen Stapleton, the Oscar-winning character actress whose subtle vulnerability and down-to-earth toughness earned her dramatic and comedic roles on stage, screen, and television, died Monday. She was 80.

Stapleton, a longtime smoker who had been living in Lenox, died from chronic pulmonary disease, said her son, Daniel Allentuck.

Stapleton, whose unremarkable, matronly appearance belied her star personality and talent, won Tony Awards for theater in 1951 and 1971, an Emmy Award for television in 1967, and an Academy Award in 1981.

"She was prominent in the 50s, 60s, 70s, 80s, 90s. She never lost her talent, her luster or her stature," "Entertainment Tonight" film critic Leonard Maltin told CBS Radio News.

What was her signature role?

"When you've had a career as long and as varied and as celebrated as Maureen Stapleton, it's hard to pick just one thing," Maltin said.

Her Oscar was for her supporting role as anarchist-writer Emma Goldman in Warren Beatty's "Reds," about a left-wing American journalist who journeys to Russia to cover the Bolshevik Revolution.

To prepare for the role, Stapleton said she tried reading Goldman's autobiography, but soon chucked it out of boredom.

"There are many roads to good acting," Stapleton, known for her straightforwardness, said in her 1995 autobiography, "Hell of a Life." "I've been asked repeatedly what the 'key' to acting is, and as far as I'm concerned, the main thing is to keep the audience awake."

Stapleton was nominated several times for a supporting actress Oscar, including for her first film role in 1958's "Lonelyhearts;" "Airport" in 1970; and Woody Allen's "Interiors" in 1978.

Her other film credits include the 1963 musical "Bye Bye Birdie" opposite Ann-Margret and Dick Van Dyke, "Johnny Dangerously," "Cocoon," "The Money Pit" and "Addicted to Love."

She was the 10th person to win an Oscar, a Tony and an Emmy.

Brought up in a strict Irish-Catholic family with an alcoholic father, Stapleton left home in Troy, N.Y., right after high school. With $100 to her name, she came to New York and began studying at the Herbert Berghof Acting School and later at the Actor's Studio, which turned out the likes of Marlon Brando, Paul Newman and Julia Roberts.

Stapleton soon made her Broadway debut in Burgess Meredith's 1946 production of "The Playboy of the Western World."

At age 24, she became a success as Serafina Delle Rose in Tennessee Williams' Broadway hit "The Rose Tattoo," and won a Tony Award. She replaced an Italian actress old enough to be her mother whose English wasn't good enough for Broadway.

"She was one of these character actresses who could fill any number of roles. She played a lot of 'earth mother' types, especially in later years," said Maltin. But her first such role was as Serafina, at age 24.

She also appeared in numerous other stage productions, including Lillian Hellman's "Toys in the Attic" and Neil Simon's "The Gingerbread Lady," for which she won her second Tony in 1971.

She starred opposite Laurence Olivier in Williams' "Cat on a Hot Tin Roof." Stapleton's friendship with Williams was well-known and he wrote three plays for her — but she never appeared in any of them.

Along the way, she led a chaotic personal life, which her autobiography candidly described as including two failed marriages, numerous affairs, years of alcohol abuse and erratic parenting for her two children.

She often said auditioning was hard for her, but that it was just a part of acting, a job "that pays."

"When I was first in New York, there was a girl who wanted to play 'St. Joan' to the point where it was scary. ... I thought 'Don't ever want anything that bad,'" she recalled. "Just take what you get and like it while you do it, and forget it."

Cast throughout her career in supporting roles, Stapleton was content not playing a lead character, Allentuck said.

"I don't think she ever had unrealistic aspirations about her career," he said.

Beside Allentuck, Stapleton is survived by a daughter, Katharine Bambery, of Lenox and a brother, Jack Stapleton, of Troy, N.Y.