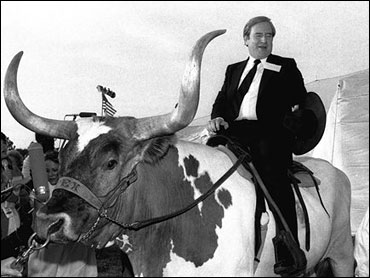 Even in his final years, the Rev. Jerry Falwell personified the religious right for many Americans. But the pastor, who died Tuesday at age 73, was from a generation of leaders that many evangelicals came to view as members of an "old guard" whose approach was outdated.

Falwell was stricken at his campus office and died after a career in which the evangelist used the power of television to transform the religious right into a mighty force in American politics.

Many conservative Christians active in politics today believe that the way Falwell confronted political foes made evangelicals seem hateful. The younger leaders also have been pressing for a broader policy agenda beyond abortion and traditional marriage by trying to include AIDS care, environmental protection and education.

"It's a very important debate about the future of the movement," said John Green, senior fellow at the Pew Forum on Religion & Public Life.

The divisions have been most apparent over the environment.

Focus on the Family founder James Dobson and 24 other Christian leaders this year tried to pressure the National Association of Evangelicals to silence its Washington director, the Rev. Rich Cizik, because Cizik is trying to convince evangelicals that global warming is real.

In a February sermon, Falwell warned worshippers at his Thomas Road Baptist Church in Lynchburg, Va., that environmental activism by evangelicals "is Satan's attempt to redirect the church's primary focus" away from spreading the Gospel.

It was a style that appealed to many conservative Christians when Falwell entered the public arena in the 1970s. The U.S. Supreme Court had legalized abortion in 1973, drawing Christians who had separated themselves from the broader culture out of church and into politics. Falwell and his allies formed the Moral Majority in 1979, helping bring millions of new evangelical voters to the Republican Party and putting Ronald Reagan in the White House in 1980.

Read more about the life of Jerry Falwell.

Who's Who: Falwell Remembered

The Moral Majority was effectively dead within a decade, but the Christian right continued to grow more diverse and sophisticated as they moved from the margins of political life.

However, Michael Reagan, son of the former president and now a radio talk show host, believes Falwell's controversial moments only made him lose credibility among the non-religious population.

"Many of the Christian organizations, in fact, supported him and his belief.At least he would stand up and say it," Reagan told CBS News' The Early Show.

Reagan added that Falwell's legacy will be remembered positively because he "got Christians out of their houses and out of their pews and got them to start voting."

Conservative Christians are now veteran political operatives who can deliver votes in school board races and presidential campaigns. They fill leadership posts throughout the Republican Party and comprise more than one-third of the GOP base.

Many had already been looking beyond Falwell and his allies for new leaders when the pastor died. A 2004 poll for PBS's "Religion & Ethics Newsweekly" found that U.S. evangelicals had a lower regard for Falwell than for Pope John Paul II. Falwell became such a polarizing figure that his role in the 2004 Republican National Convention was limited to appearing at a closed-door rally for religious activists.

Falwell's remaining clout was concentrated in the Lynchburg school he founded, Liberty University, where thousands of young conservative Christians are being educated.

GOP presidential candidates, many lacking strong evangelical backgrounds, have made the school a campaign stop. Arizona Sen. John McCain, who during the 2000 Republican primaries called Falwell and the Rev. Pat Robertson, "agents of intolerance," gave last year's commencement address at Liberty. This year's speaker at the Liberty graduation, which will be held as scheduled Saturday, will be former House Speaker Newt Gingrich, who is considering a presidential run.

Still, Falwell was in the twilight of his political leadership when he died.

The organizational muscle of the movement — once controlled by national groups linked to Falwell, Robertson and a few others — now lies with local pastors, who were key to the 2004 re-election win of President George W. Bush.

Falwell leaves behind allies including Dobson, 71; Robertson, 77, founder of the Christian Coalition and the influential American Center for Law & Justice; and the Rev. D. James Kennedy, 76, a founding board member of the Moral Majority and founder of the Center for Reclaiming America for Christ, who has been sidelined by the effects of a heart problem.

"Jerry has been a tower of strength on many of the moral issues which have confronted our nation," Robertson said in a statement. "Jerry's courage and strength of convictions will be sadly missed."