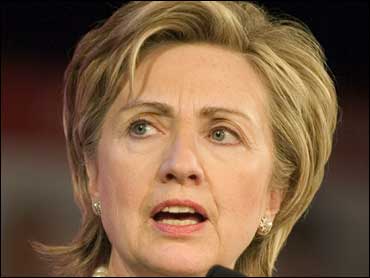 The Reverend Jerry Falwell says a comment he made that Sen. Hillary Clinton would energize religious conservatives even more than if the devil were the Democratic nominee was "totally tongue-in-cheek."

At a private prayer breakfast Friday, Falwell said, "I certainly hope that Hillary is the candidate. Because nothing will energize my (constituency) like Hillary Clinton."

"If Lucifer ran, he wouldn't," Falwell added, drawing a roomful of laughs and cheers.

The remarks came during a 40-minute address Friday morning at the "Values Voter Summit," sponsored by the country's leading conservatives and featuring several Republicans who are considering running for president in 2008.

Falwell says he did not intend to demonize the Democratic senator from New York and that everyone there knew he was joking and everyone laughed.

The Los Angeles Times, which reported Falwell's comments in a story Sunday, said it obtained a tape recording of the talk and confirmed Falwell's remarks with those who heard them.

Attendees also were assured during the prayer breakfast that God would preserve a Republican majority in Congress.

Clinton press secretary Philippe Reines says it seems that a new low has been reached in demonizing political opponents.

A possible Republican presidential contender, Sen. John McCain of Arizona, speaking Sunday on CBS's Face the Nation was more temperate about Sen. Clinton. McCain, who once said Clinton would make a good president, defined his sentiment saying, "She works hard as a senator, and I think that she knows her issues."

"I am sure that she would do a job that is in keeping with her philosophy and her beliefs," he said. "I think we have very different views on the conduct of the presidency. But she works hard as a senator, and I think she knows her issues."