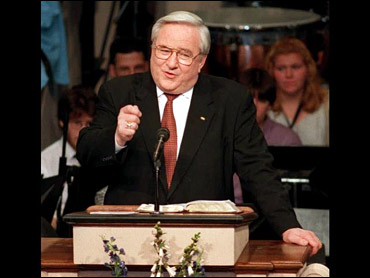 He said he got religion from listening to evangelical preachers on the radio.

Born in 1933, Jerry Falwell grew up in Lynchburg, Va., and prepared for the ministry at Bible Baptist College in Springfield, Mo.

He had an unlikely beginning for the Christian ministry: his grandfather was a self-avowed atheist; his father, an agnostic who hated preachers and ran a moonshine operation during Prohibition. But Falwell decided early on, in his teen years, to devote his life to Christian service, calling himself a spiritual streetfighter.

"If we lose our moral bearings, we shall surely collapse," he once said.

In 1979, Falwell heeded a call to mobilize the Christian church on behalf of moral and social issues, against abortion, gay rights and pornography.

While he dissolved the Moral Majority in 1989, Falwell remained a tireless fundraiser and spokesperson for conservative Christian views.

"When God wants to ring your bell, he knows where the button is," he once declared.

And when Jerry Falwell wanted to get the public's attention he knew what to do.

"God's church is still alive and doing well," was a familiar theme on his broadcasts.

His church services were broadcast on hundreds of TV and radio stations. Once, he claimed to have an audience in the tens of millions.

"If we are going to reach the world, we have got to use the media," he explained.

"The issue of marriage is simply an eternal one. That is, one man married to one woman," he said.

For Falwell, the issue had no middle ground.

"To endorse marriage is to say to the society, to the culture, that what is wrong both biblically, theologically, sociologically is OK in America," he told CBS News.

With moral values playing a key factor in 2004's presidential election, Falwell formed a new coalition to guide "an evangelical revolution." Among its goals: a constitutional amendment banning same-sex marriage, and the election of another "George Bush-type" conservative in 2008.

Falwell was first thrust onto the national stage after he founded the Moral Majority in 1979.

"We need to get people of faith back into action," he said.

The group raised millions to support political candidates who believed in conservative and Christian values. His support of Mr. Bush's presidential candidacy in 2000 was so fierce it led Sen. John McCain to charge, "neither party should be defined by pandering to the outer reaches of American politics and the agents of intolerance. Whether Louis Farrakhan or Al Sharpton on the left or Pat Robertson or Jerry Falwell on the right."

But Falwell was not apologetic in the least.

"Abortion, family values, the moral underpinnings on which the nation was built we call the Judeo-Christian ethic, is important to us," Falwell said.

He was a man of strong opinions. That often got him in trouble.

In 1999, he charged that a popular children's television character, one of the Teletubbies, could be gay because he was purple and carried a handbag. One Falwell critic responded by saying he'd "rather watch the 'Teletubbies' than televangelists."

After Sept. 11, Falwell declared God's anger with gays, lesbians, abortionists and feminists had contributed to the terrorist attacks. He later apologized, saying only the terrorists were to blame. But in 2002, this comment led to deadly riots in the Muslim world:

"I think Muhammad was a terrorist. I've read enough of the history of his life, written by both Muslims and non-Muslims, that he was a violent man, a man of war."

Again Falwell was stung by criticism. But he still had the ability to deliver big bucks and votes to political candidates — and that gave him power to keep pushing his moral agenda.

Though his televangelism would experience problems — he once lost his tax exemption when the IRS determined his "Old Time Gospel Hour" was being used for political purposes — he nevertheless kept broadcasting.

It's what Jesus would have done, he said.
By Gail Lee