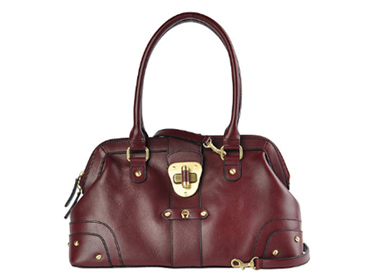 Summer's almost over and that fall chill is beginning to creep into the air, so what better time to take a look at must-have items to keep you looking cool as you go about your day-to-day business?

On "The Early Show on Saturday Morning," style contribiutor Katrina Szish let it out of the bag, so to speak, showcasing the hottest bags for men and women, each filled with tons of great items -- everything from the best fall reads to the perfect seasonal shades to neat new gadgets!

WOMEN'S BAG: BAG: ETIENNE AIGNER HANDBAG $120
Women should pick out a bright, ladylike, structured bag for the fall. They're everywhere and are perfect to fit all of your fall must haves!

GADGET: iPOD NANO TOUCH $149
Just released on Sept 1st - the iPod nano has been completely redesigned with Multi-Touch - the same technology that makes iPhone, iPad, and iPod touch so amazing. iPod nano is 46 percent smaller, 42 percent lighter, and 100 percent made for music with Multi-Touch. It's the perfect size for a tap or a swipe, so fingertips feel right at home. Now it's half the size and even easier to play. And everything you want to hear is just a tap or swipe away. In sleek anodized aluminum and seven bright colors, iPod nano makes a huge statement: You are, most definitely, ready to rock. Show off your album art, photos, and the color-coordinated wallpaper on the 1.5-inch color display with 240-by-240 pixel resolution. It's tiny yet stunning.
http://www.apple.com/ipodnano/

BOOK: HUNGER GAMES TRILOGY, SUZANNE COLLINS $54
The extraordinary, ground breaking New York Times bestsellers "The Hunger Games" and "Catching Fire," along with the third book in the Suzanne Collins trilogy, "Mockingjay,' are available for the first time ever in a beautiful box set edition. Stunning, gripping, and powerful. The trilogy is now complete!

"The Hunger Games"
Twenty-four are forced to enter. Only the winner survives.
In the ruins of a place once known as North America lies the nation of Panem, a shining Capitol surrounded by twelve outlying districts. Each year, the districts are forced by the Capitol to send one boy and one girl between the ages of twelve and eighteen to participate in the Hunger Games, a brutal and terrifying fight to the death - televised for all of Panem to see. Survival is second nature for sixteen-year-old Katniss Everdeen, who struggles to feed her mother and younger sister by secretly hunting and gathering beyond the fences of District 12. When Katniss steps in to take the place of her sister in the Hunger Games, she knows it may be her death sentence. If she is to survive, she must weigh survival against humanity and life against love.

"Catching Fire"
Against all odds, Katniss Everdeen has won the annual Hunger Games with fellow district tribute Peeta Mellark. But it was a victory won by defiance of the Capitol and their harsh rules. Katniss and Peeta should be happy. After all, they have just won for themselves and their families a life of safety and plenty. But there are rumors of rebellion among the subjects, and Katniss and Peeta, to their horror, are the faces of that rebellion. The Capitol is angry. The Capitol wants revenge. Suzanne Collins continues the amazing story of Katniss Everdeen in Catching Fire, the second novel of the phenomenal Hunger Games trilogy.

"Mockingjay"
Against all odds, Katniss Everdeen has survived the Hunger Games twice. But now that she's made it out of the bloody arena alive, she's still not safe. The Capitol is angry. The Capitol wants revenge. Who do they think should pay for the unrest? Katniss. And what's worse, President Snow has made it clear that no one else is safe either. Not Katniss's family, not her friends, not the people of District 12. Powerful and haunting, this thrilling final installment of Suzanne Collins's groundbreaking The Hunger Games trilogy promises to be one of the most talked about books of the year.

BEAUTY: NARS LIPSTICK $24, NAILPOLISH: ESSE $8 & CHANEL $25
Lots of fun colors for the fall from rusts, to khaki shades, to darker, edgier tones. Nail polish is the best way to show off fall's best shades and we have lots of options at difference price points.

SHOES: FOOTZYROLLS (ROLL UP BALLET FLATS) $15
These shoes are the solution to cries of any woman that has ever walked to work in heels, or had to store a pair of sneakers in their purse. These flats roll right up and can tuck easily into your purse. They also come with a bag to keep the flats in, as well as a bag to keep your heels in when you're wearing the flats.
www.footzyrolls.com

MEN'S BAG:MESSENGER BAG, BANANA REPUBLIC $98
This messenger bag comes in olive, giving it that military-inspired look that is everywhere this fall. Strap can be adjusted to hang like a low messenger bag or higher up. It has one exterior pocket and three interior ones, leather trim on the outside, and measures 18" x 12.5" x 3".

GADGET: CALLET CASE $15
The Callet is a new phone case and wallet in one with a newly invented and patent pending design that makes the Callet easy to use and even easier to take your things with you. The innovative Callet comes customized to fit perfectly on many of the the most popular phones that you already use, but it also has easily accessible and ultra-convenient slit-pockets that can hold your cash and cards. The Callet's unique design allows for easy access to whatever you're carrying with you. And the Callet has been specifically engineered to take up a minimal amount of space when holding your stuff, so it doesn't have that bulky feeling when you're on the go. We know most of you now have a Blackberry or an iPhone, so the Callet is available for either one! You can get it for any Blackberry or iPhone models.
http://thecallet.com/about/

BOOK: JONATHAN FRANZEN, "FREEDOM" $28
Patty and Walter Berglund were the new pioneers of old St. Paul -- the gentrifiers, the hands-on parents, the avant-garde of the Whole Foods generation. Patty was the ideal sort of neighbor, who could tell you where to recycle your batteries and how to get the local cops to actually do their job. She was an enviably perfect mother and the wife of Walter's dreams. Together with Walter-environmental lawyer, commuter cyclist, total family man-she was doing her small part to build a better world.

But now, in the new millennium, the Berglunds have become a mystery. Why has their teenage son moved in with the aggressively Republican family next door? Why has Walter taken a job working with Big Coal? What exactly is Richard Katz-outré rocker and Walter's college best friend and rival-still doing in the picture? Most of all, what has happened to Patty? Why has the bright star of Barrier Street become "a very different kind of neighbor," an implacable Fury coming unhinged before the street's attentive eyes?

In his first novel since "The Corrections," Jonathan Franzen has given us an epic of contemporary love and marriage. "Freedom" comically and tragically captures the temptations and burdens of liberty: the thrills of teenage lust, the shaken compromises of middle age, the wages of suburban sprawl, the heavy weight of empire. In charting the mistakes and joys of "Freedom" 's characters as they struggle to learn how to live in an ever more confusing world, Franzen has produced an indelible and deeply moving portrait of our time.

SUNGLASSES: MICHAEL KORS AVIATORS, BLOOMINGDALE'S $90
Yes, the summer sun may be gone, but that doesn't mean its time to put away the shades. These are the only sunglasses that guys should be wearing this season, and they should be wearing them EVERYWHERE.

GLOVES: ECHO TOUCH $30
Keep your hands warm while you keep in touch! Echo Touch gloves are engineered specifically with the new wave of technology in mind. Adhered to the index finger and thumb of each glove, our eLink fabric interacts with touch screen devices, making them compatible with the iPod, iPhone, iPad and other touch sensitive digital devices.