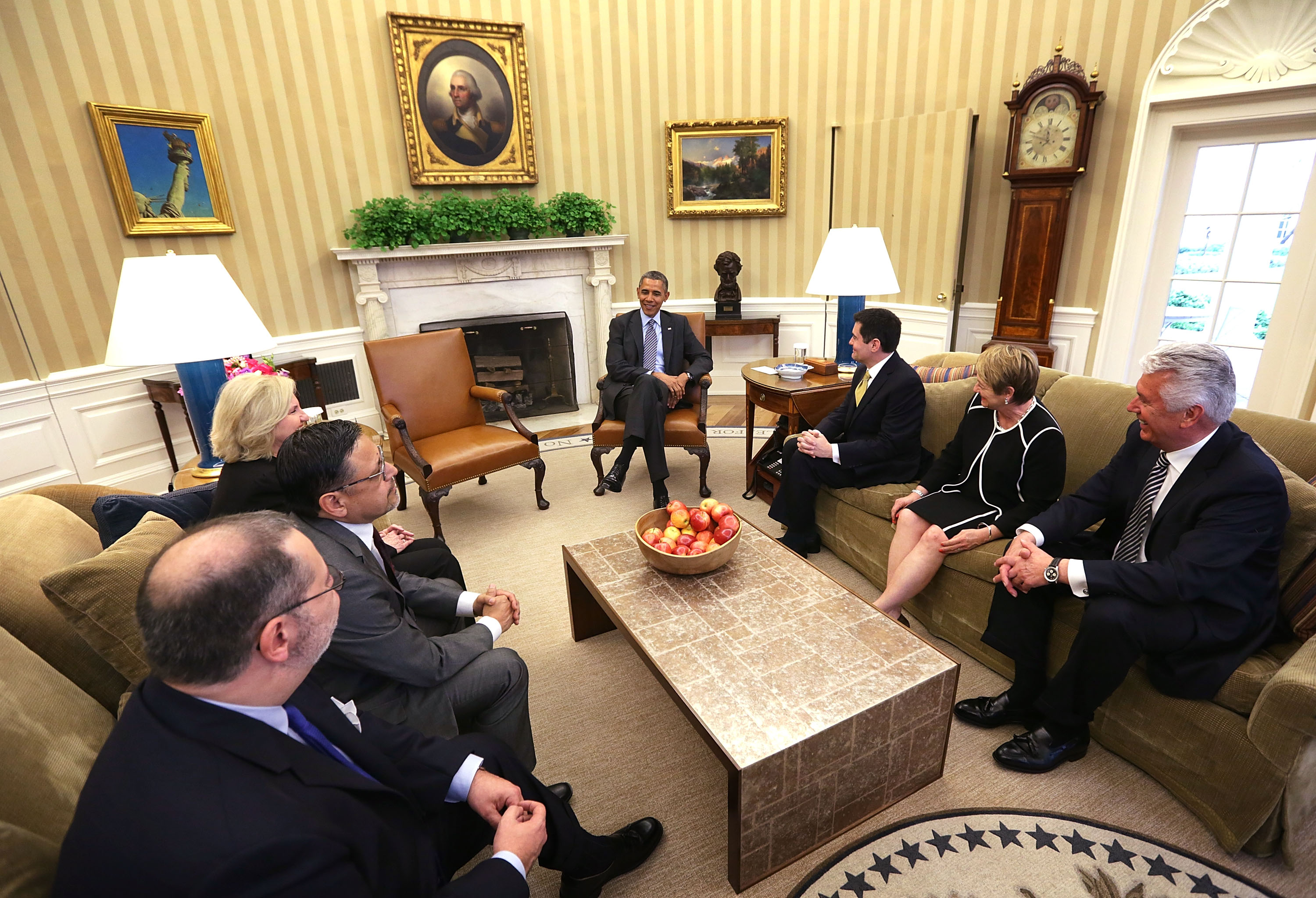 Although advocates of comprehensive immigration reform have trained their sights on President Obama recently, House Republicans are facing a final dose of pressure to pass legislation before the summer recess and midterm elections grind work in Congress to a halt.

From one side, leaders from a variety of faiths plan to appeal to Republicans for a common-sense overhaul of the nation's immigration laws that will result in better enforcement and less family separation. On the other side are House Democrats, who are still working to enlist the support of Republicans who have expressed support for immigration reform in the past or who would have the most to gain by supporting legislation.

After several public exhortations to get House Republicans to act, the president has largely left them to their own devices. Facing Latino advocates who have labeled him the "deporter-in-chief," he has ordered a review of his administration's deportation policies but insisted there's little he can do without a legislative fix.

He repeated that point Tuesday in a meeting with faith leaders from around the country. The White House, in a statement about the meeting, said Mr. Obama, "emphasized that while his Administration can take steps to better enforce and administer immigration laws, nothing can replace the certainty of legislative reform and this permanent solution can only be achieved by Congress."

Luis Cortes, the president of Esperanza, a Hispanic faith-based community-development corporation, told reporters that the president told the group, "he would not be doing anything to change the law as it currently exists."

"He sounds pretty committed to waiting until the August recess, this next few months to see if the House will take up some kind of action here," said another meeting participant, Noel Castellanos, the CEO of the Christian Community Development Association in Chicago. "He's kind of damned if he does, damned if he doesn't. Really the president's action is temporary, anything he does doesn't' fix anything. We're pushing for a law change."

Although the House Republican conference released a set of immigration principles earlier this year, they quickly backed away from action after House Speaker John Boehner, R-Ohio, said lawmakers could not trust the president to enforce the law. Several single-issue bills have been authored by a handful of lawmakers on the Judiciary Committee, but none have received a vote on the floor.

Despite the yawning gap between Democrats and Republicans on the issue - Democrats want the GOP to take up the bill passed by the Senate that includes a conditional pathway to citizenship for some illegal immigrants - the faith leaders still see an avenue for compromise.

"I think that there's a real consensus in the faith community that something needs to be done and that there's plenty of space for a commonsense solution," Suzii Paynter, the Executive Coordinator of the Cooperative Baptist Fellowship in Atlanta, who attended the White House meeting, told CBS News. She added that there is "no lack of commitment" among faith leaders, even though they have been disappointed before.

Castellanos noted that there has never been as much unity between the diverse spectrum of religious groups on the issue, and that they have become more "focused" in their efforts to move Congress to action. There will be a fly-in by several evangelical groups in late April to talk to lawmakers, and the plan is to push for action in the final work period in June and July before the month-long August recess.

The timing dovetails with the effort by House Democrats to target 30 GOP representatives who have expressed some support for immigration reform. They want support for a so-called "discharge petition" which would compel Boehner to put their immigration bill, which resembles the Senate legislation, up for a vote.

"We are now asking them to put their pen where there mouth is," said Rep. Jared Polis, D-Colo.

The lawmakers range from Republicans who have worked on a bipartisan bill that didn't come to fruition, to Rep. Paul Ryan, R-Wis., who has been the most vocally supportive lawmaker who has ties to the leadership.

Rep. Joe Garcia, D-Fla., said it was a "last effort" for legislative reform because of the pending executive review on deportation policy. Some Democrats believe the president will be forced to act under pressure from advocacy groups and no sign of a bipartisan solution with Congress.