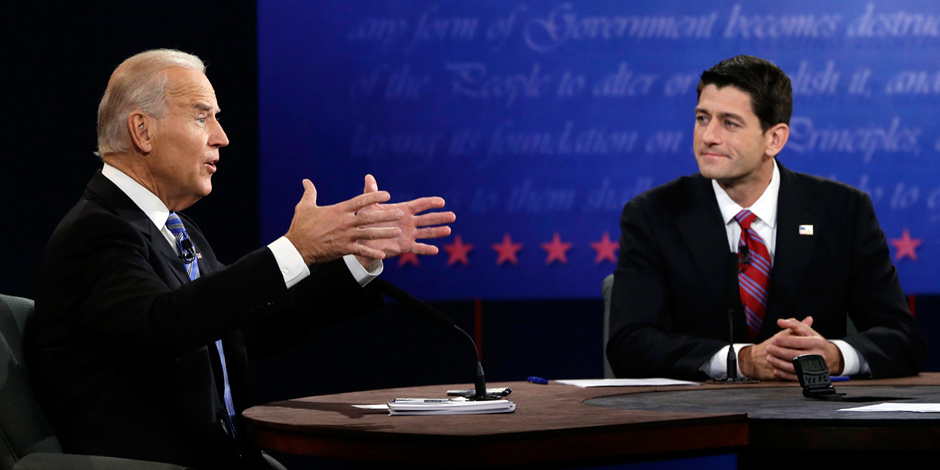 In the one-and-only vice presidential debate of the general election campaign, Vice President Joe Biden and Republican candidate Rep. Paul Ryan went head-to-head over issues ranging from Iran, to job creation, to Medicare. Below, CBSNews.com looks into the facts behind those charges.

RYAN: "When you take a look at what has happened just in the last few weeks, they sent the U.N. ambassador out to say that this was because of a protest and a YouTube video. It took the president two weeks to acknowledge that this was a terrorist attack. He went to the U.N. and in his speech at the U.N. he said six times -- he talked about the YouTube video."

President Obama did technically refer to the attack on the U.S. consulate in Libya as an act of "terror" on September 12 -- the day after the incident -- in remarks in the White House rose garden.

"No acts of terror will ever shake the resolve of this great nation, alter that character, or eclipse the light of the values that we stand for," Mr. Obama said.

However, it's true that the administration, including U.S. ambassador to the United Nations Susan Rice, maintained for several days that the attack was spontaneous and the result of protests over an inflammatory anti-Muslim video. Meanwhile, CBS News reported on Sept. 12 that the assault appeared to be a planned terrorist attack.

In his speech to the U.N. General Assembly on Sept. 25, Mr. Obama did, as Ryan said, say the word "video" six times. He didn't give any indication, however, that the attack was an act of terrorism.

BIDEN: "This lecture on embassy security -- the congressman here cut embassy security in his budget by $300 million below what we asked for, number one... Number two, Governor Romney, before he knew the facts, before he even knew that our ambassador was killed, he was out making a political statement which was panned by the media around the world."

The Hill reported last month: "The Obama administration requested $1.801 billion for embassy security, construction and maintenance for fiscal 2012; House Republicans countered with a proposal to cut spending to $1.425 billion. The House agreed to increase it to $1.537 billion after negotiations with the Senate."

That means House Republicans asked for $376 million less in security funding and eventually agreed to $264 million less. Rep. Jason Chaffetz, R-Utah, said on CNN this week that House Republicans "absolutely" voted to cut funding for embassy security. "Look we have to make priorities and choices in this country," he said.

As for the point about Romney's political statement -- the Republican campaign issued a statement in the 10 o'clock hour on Sept. 11. "I'm outraged by the attacks on American diplomatic missions in Libya and Egypt and by the death of an American consulate worker in Benghazi," Romney's statement said. "It's disgraceful that the Obama Administration's first response was not to condemn attacks on our diplomatic missions, but to sympathize with those who waged the attacks."

About eight hours later, the Associated Press reported that Libyan officials confirmed the death of U.S. Ambassador to Libya Chris Stevens. Then about an hour later, the president confirmed Stevens' death. Then that morning, Sept. 12, Romney said he stood by his initial remarks criticizing the president.

As CBS News reported this week, Eric Nordstrom, the former regional security officer in Libya, "told congressional investigators that he had requested more security but that request was blocked by a department policy to 'normalize operations and reduce security resources.' Under questioning, though, he said he had sought mainly to prevent any reduction in staff, rather than have a big increase... A memo Tuesday by the Oversight Committee's Democratic staff provided details of Nordstrom's interview with the panel's investigators. In that interview, Nordstrom said he sent two cables to State Department headquarters in March 2012 and July 2012 requesting additional diplomatic security agents for Benghazi, but he received no responses."

BIDEN: "When my friend talks about fissile material, they have to take this highly enriched uranium, get it from 20 percent up, then they have to be able to have something to put it in. There is no weapon that the Iranians have at this point. Both the Israelis and we know -- we'll know if they start the process of building a weapon."

Biden emphasized that Iran has not yet produced weapons-grade fissile material, nor has it weaponized the nuclear program by securing a missile capable of delivering a nuclear strike.

Multiple intelligence agencies, including those in the United States and Israel, have indicated that, although Iran is enriching Uranium as part of a civilian nuclear energy program, they have not yet decided to enrich it to weapons-grade fissile material, nor have they decided to weaponize the enriched uranium.

Echoing this analysis, Director of National Intelligence James Clapper argued in a statement, "We continue to assess Iran is keeping open the option to develop nuclear weapons in part by developing various nuclear capabilities that better position it to produce such weapons, should it choose to do so. We do not know, however, if Iran will eventually decide to build nuclear weapons."

Clapper and Panetta were seconded in their analysis by several Israeli officials, including the head of the Israeli Military, Chief of Staff Lt. Gen. Benny Gantz, who explained, "[Iran] is going step by step to the place where it will be able to decide whether to manufacture a nuclear bomb. It hasn't decided to go the extra mile."

However, it is clear that Iran is burnishing its strike capabilities, provoking the international community repeatedly in recent months by unveiling and testing new missile technology. In August, Iran unveiled a new short-range ballistic missile, the Fateh-110 or Conquerer, arguing that the new technology was merely an exposition of defensive technology, not an augur of aggression. Similarly, in July, Iran admitted test-firing several ballistic missiles, including some with enough range to strike Israel, southern Europe, and U.S. bases in the region.

Despite these provocations, many remain convinced that Iran's capabilities do not yet represent a mortal threat to the security of America and her allies. Theodore Postol, a missile defense expert, told the BBC in May that "There is no realistic threat to troops, cities, oil refineries, and the like from Iranian ballistic missiles. They can simply not carry large enough conventional munitions to do extensive damage on impact, and they lack the accuracy to hit prescribed targets with reliability."

The Romney campaign supports reforming the current Medicare program to a "premium support" system, wherein the government offers a senior a predefined amount of money to spend in a health insurance exchange rather than paying directly for the benefits a senior uses. The campaign has said current seniors would not be impacted by the plan and that insurance plans would be required to offer coverage at least comparable to what Medicare currently provides.

The plan is modeled after the plan Ryan put forward in successive House budgets. The Congressional Budget Office concluded that Ryan's fiscal-year 2012 Medicare plan would increase out-of-pocket costs for seniors by $6,400. There are no CBO estimates for his amended 2013 plan, but the Journal of the American Medical Association reported on a study concluding it would cost the average senior $800 a year.

RYAN: "That's what our entire premise of our pro-growth plan for a stronger middle class is all about: getting the economy growing at 4 percent, creating 12 million jobs over the next four years."

According to most analysts, the "12 million" number is rosy but not impossibly audacious - and job growth could approach that number under either a second Obama term or a first Romney term.

Saying the 12 million jobs figure "could be a stretch," Robert Samuelson points out that several macroeconomic analyses predict job growth at or below that range. Moody's Analytics has forecast payroll growth from 133.2 million in 2012 to 145 million by 2016, an increase of almost 12 million new jobs. But an analysis from IHS global is less sanguine, predicting 9.7 million new jobs by 2016.

Naturally, predictions like these rest on a series of assumptions that are anything but guaranteed -- they anticipate no new recession, a stronger recovery, and an absence of exigent circumstances that could negatively impact the economy, such as a Eurozone implosion or oil shortage.

But on balance, the Romney/Ryan promise of 12 million additional new jobs is within the range of possibility, if at the upper end of that range. Whether Romney's proposed policies would be responsible for such job growth is another matter.

The Bureau of Labor Statistics factors more than just raw payroll growth into its monthly calculation of the unemployment rate. Because the monthly statistic also takes into account the number of people who drop out of the labor force and the total number of work-eligible Americans, among other data, it is difficult to say where 12 million new jobs in four years would leave the unemployment rate -- whether at, below, or above 6 percent.

Biden invoked Democrats' oft repeated accusation that Mitt Romney would "let Detroit go bankrupt." In the past, Democrats have pointed to an op-ed Mitt Romney wrote in the New York Times (which the Times -- not Romney -- conveniently titled "Let Detroit Go Bankrupt") in which Romney argued that the beleaguered automotive companies should be pushed through a managed bankruptcy process to cut dead weight and streamline the companies to improve their competitiveness going forward.

Romney further argued that any bailout funds should come from the private sector, not the government. And therein lies the rub -- the administration and congressional Democrats have pointed out the dearth of private money available to the car companies at the time. There were no private financiers able and willing to step in and loan the car companies the money to get back on their feet, so the government became the lender of last resort.