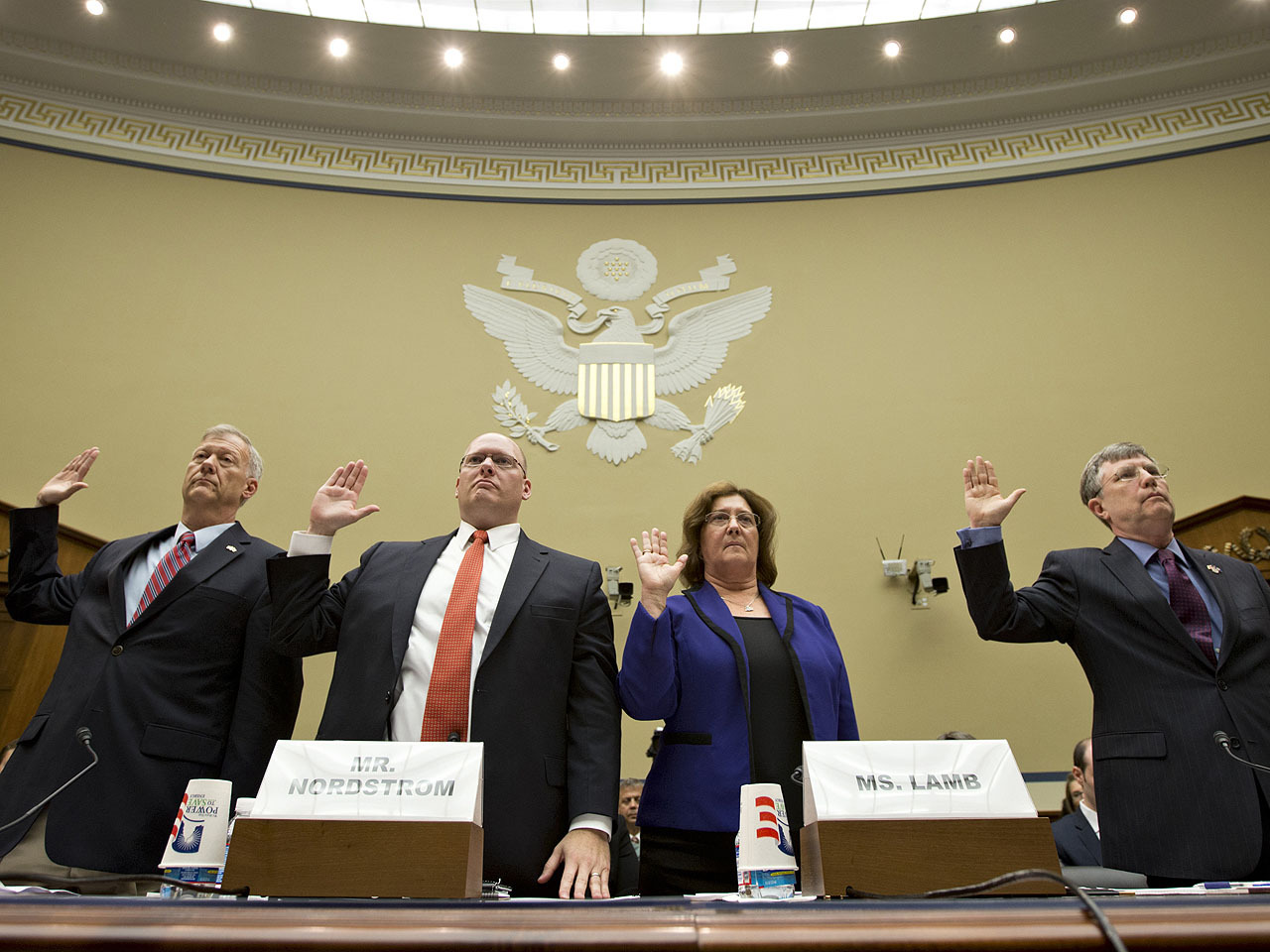 WASHINGTON State Department officials said Wednesday that security levels at the U.S. consulate in Benghazi, Libya, were adequate for the threat level on the anniversary of 9/11 but that the compound was overrun by an "unprecedented attack" by dozens of heavily armed extremists.

The officials testified before an election-season congressional hearing on accusations of security failures at the consulate that led or contributed to the deaths of the Ambassador Christopher Stevens and three other Americans. The officials said the number of U.S. and local security guards at the compound was consistent with what had been requested by the post.

"We had the correct number of assets in Benghazi at the time of 9/11," said Charlene Lamb, the deputy secretary of state for diplomatic security in charge of protecting American embassies and consulates around the world.

House Oversight and Government Reform Committee chairman Rep. Darrell Issa, on one of several contentious moments between lawmakers and witnesses, told Lamb that explanation didn't "ring true" in light of the deadly attacks.

White House spokesman Jay Carney told reporters Wednesday that in hindsight "there is no question that the security was not enough to prevent that tragedy from happening."

"There were four Americans killed," he said.

Lamb noted that there were five diplomatic security agents at the consulate at the time of the attack, along with additional Libyan guards and a rapid response team at a nearby annex.

In a hastily scrambled post-hearing presser, State Department official Pat Kennedy said of keeping a consulate in Benghazi: "It was worth the risk."

Kennedy is one of the highest-ranking State Department officials to speak on the issue so far. He said "we had to be there" as the new Libya was being born. However, the State Department is reassessing whether or not to return to Benghazi and have a presence there.

The security support from the Department of Defense was "superb," but it was focused on Tripoli, not Benghazi. Staffing in Benghazi was consistent with the numbers that Eric Nordstrom requested, according to Kennedy. Having extra guards or agents wouldn't have allowed them respond any differently to the type of assault that occurred.

Kennedy was "surprised" to hear Eric Nordstrom, the former regional security officer in Libya, say that he felt that the "Taliban is inside the building" when referring to State Department refusals of asset requests.

He said that he spoke to Secretary of State Hillary Clinton before the hearing, but hasn't since the hearing.

Republican presidential nominee Mitt Romney has criticized the administration's early response to the attack and has made it a campaign issue, saying Monday that President Barack Obama has led a weak foreign policy in the Middle East and elsewhere.

Eric Nordstrom earlier told congressional investigators that he had requested more security but that request was blocked by a department policy to "normalize operations and reduce security resources." Under questioning, though, he said he had sought mainly to prevent any reduction in staff, rather than have a big increase.

"I'm confident that the committee will conclude that Department of State, Diplomatic Security Service and Mission Libya officers conducted themselves professionally and with careful attention to managing people and budgets in a way that reflects the gravity of their task," Nordstrom said.

In his prepared statement, Nordstrom said the "ferocity and intensity of the attack was nothing that we had seen in Libya, or that I had seen in my time in the Diplomatic Security Service. Having an extra foot of wall, or an extra-half dozen guards or agents would not have enabled us to respond to that kind of assault."

A memo Tuesday by the Oversight Committee's Democratic staff provided details of Nordstrom's interview with the panel's investigators. In that interview, Nordstrom said he sent two cables to State Department headquarters in March 2012 and July 2012 requesting additional diplomatic security agents for Benghazi, but he received no responses.

He stated that Lamb wanted to keep the number of U.S. security personnel in Benghazi artificially low. He said Lamb believed the Benghazi facilities did not need any diplomatic security special agents because there was a residential safe haven to fall back to in an emergency.

Nordstrom's Oct. 1 memo to the congressional investigator said, "You will note that there were a number of incidents that targeted diplomatic missions and underscored the GoL's (government of Libya) inability to secure and protect diplomatic missions.

"This was a significant part of (the diplomatic) post's and my argument for maintaining continued DS (diplomatic security) and DOD (Department of Defense) security assets into Sept/Oct. 2012; the GoL was overwhelmed and could not guarantee our protection.

Nordstrom, who served in his role as regional security officer until July 2012, also provided the committee with a list of 230 security incidents between Sept. 2011 and July 2012.

Lamb rejected allegations from Republican lawmakers, supported by Lt. Col. Andrew Wood, former head of a 16-member U.S. military team that helped protect the embassy in Tripoli, that an extension of Wood's mission could have made a difference during the attack.

"It would not have made any difference in Benghazi," Lamb said, pointing out that Wood's team was based in Tripoli and spent nearly all of its time there.

Wood, a member of the Utah National Guard who left Libya in August, told the committee that the security in Benghazi "was a struggle and remained a struggle throughout my time there."

In testimony to the House Oversight and Government Reform Committee, he said that U.S. security was so weak that in April, only one diplomatic security agent was stationed in Benghazi.

However, Lamb and Under Secretary of State for Management Patrick Kennedy stressed that the regional security officer's requests for personnel had been met.

"The Department of State regularly assesses risk and allocation of resources for security, a process which involves the considered judgments of experienced professionals on the ground and in Washington, using the best information available," said Kennedy, a four-decade veteran of the foreign service.

"The assault that occurred on the evening of Sept. 11, however, was an unprecedented attack by dozens of heavily armed men," he said.

The attack on the consulate and the Obama administration's evolving explanations of what happened have become a political football in the run-up to November's presidential election with Democrats saying that Republicans are trying to use a tragedy to score partisan points.

In statements immediately after the attack, neither President Barack Obama nor Secretary of State Hillary Rodham Clinton mentioned terrorism. And both gave credence to the notion that the attack was related to protests about an anti-Islam video.

"Some have sought to justify this vicious behavior as a response to inflammatory material posted on the Internet," Clinton said on the night of the attack. "The United States deplores any intentional effort to denigrate the religious beliefs of others. Our commitment to religious tolerance goes back to the very beginning of our nation. But let me be clear: There is never any justification for violent acts of this kind."

Republican lawmakers leveled heavy criticism at Susan Rice, the U.S. ambassador to the United Nations, for saying five days after the attack that it was an outgrowth of a spontaneous protest linked to the anti-Muslim film.

"If any administration official including any career official were on television on Sunday, Sept. 16, they would have said what Ambassador Rice said," Kennedy said. "The information she had at that point from the intelligence community is the same that I had at that point."

CBS News, as early as Sept. 12, reported that U.S. officials suspected the attackers were either associated with or sympathized with al Qaeda and took advantage of the so-called protest to stage a coordinated attack.

But witnesses in Benghazi later told CBS News that no protest had occurred at all, a fact the State Department acknowledged Tuesday in a briefing with reporters.

Asked about the administration's initial - and since retracted - explanation linking the violence to protests over the anti-Muslim video circulating on the Internet, one official said, "That was not our conclusion."

He called it a question for "others" to answer, without specifying. The officials spoke on condition of anonymity because they weren't authorized to speak publicly on the matter, and provided no evidence that might suggest a case of spontaneous violence or angry protests that went too far.

Republican committee members sought to take the witnesses to task for that shifting explanation of what happened in Benghazi, suggesting that the administration was trying to cover up that it was unprepared for the 11th anniversary of the Sept. 11, 2001, terrorist attacks.

The hearing opened with a blunt partisan exchange between the committee chairman, Issa, R-Calif., and ranking Democrat Elijah Cummings of Maryland who accused Republican members of withholding documents and witnesses and keeping Democrats out of the loop on a fact-finding trip to Libya last week.