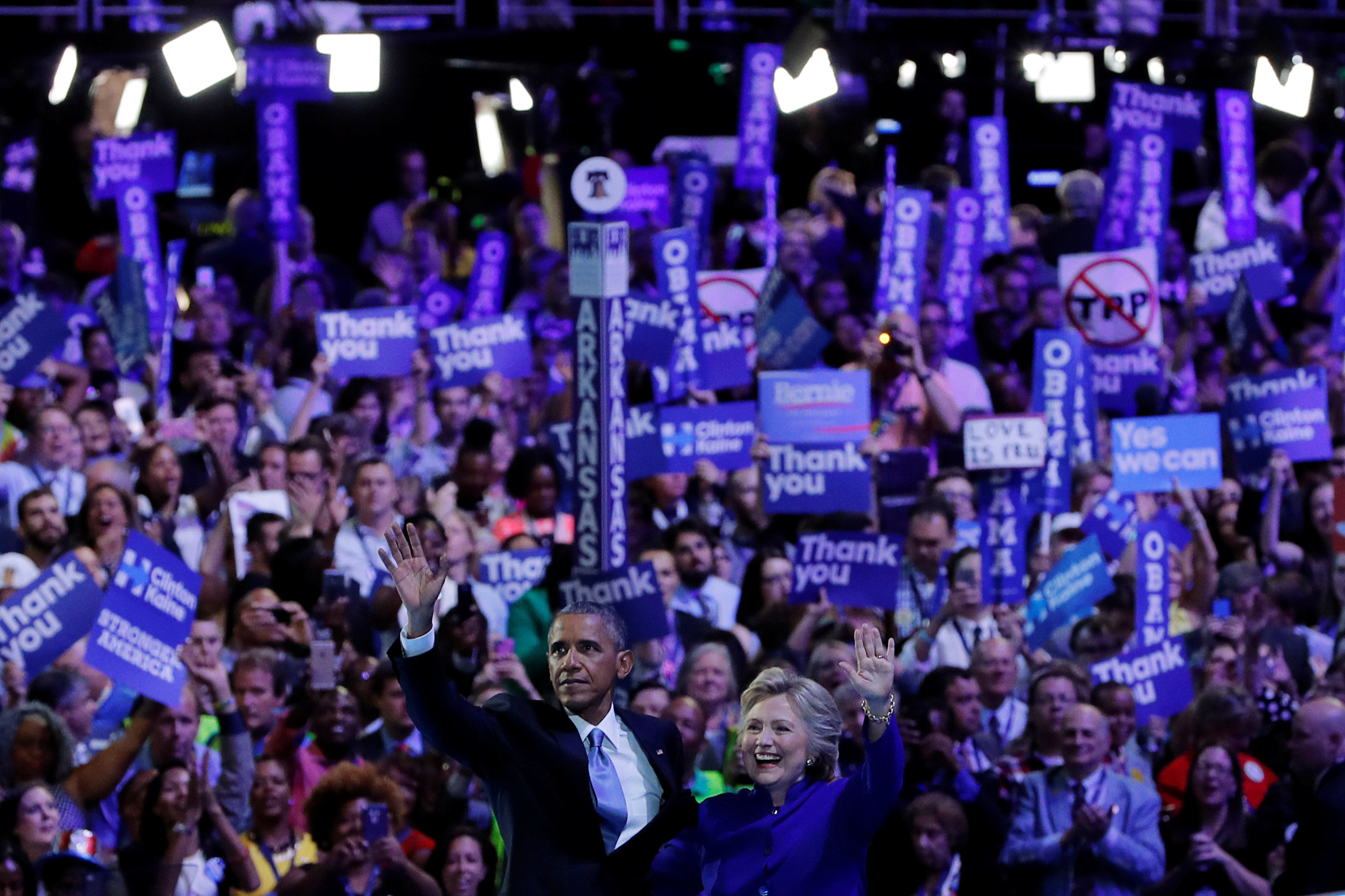 WASHINGTON -- It's hot out there, politically speaking, with Hillary Clinton's convention going full steam and Donald Trump refusing to stay quiet while Democrats put on their big show. Reality is sometimes getting warped in the process.

A look at some claims Wednesday and how they compare with the facts, on a day packed with a lengthy news conference by Trump and evening convention speeches by high-powered Democrats, capped by President Barack Obama:

OBAMA: "After a century of trying, we declared that health care in America is not a privilege for a few, but a right for everybody."

THE FACTS: Obama's health care overhaul does guarantee that people with pre-existing medical conditions can no longer be denied health insurance, but it also made coverage an obligation for everybody. People must have coverage or face fines from the IRS. That mandate remains highly unpopular.

The law provides subsidies to help low- to middle-income people purchase a private plan. But even so, some find their premiums too high. And nearly 29 million remain uninsured, according to government estimates. Health care as a "right for everybody" may better describe Bernie Sanders' idea of a government-run system for all. That system also entails obligations: the higher taxes that would be collected to pay for it.

VIRGINIA SEN. TIM KAINE, Clinton's running mate: "You can go to HillaryClinton.com right now and find out exactly how she'll make the biggest investment in new jobs in generations."

THE FACTS: It's the biggest in generations only if you don't count Obama's $814 billion 2009 stimulus, a curious omission for a Democrat.

Clinton promises to spend $275 billion over five years on roads, bridges and other infrastructure. Obama's stimulus was more of a hodge-podge and included tax cuts as well as aid to state and local governments. But all of it was intended to boost the economy and hiring.

TRUMP: "I never met Putin, I don't know who Putin is. ... I've never spoken to him." -- Miami news conference, during a discussion of whether Russia had hacked into emails of the Democratic National Committee.

THE FACTS: Not so long ago, Trump bragged about how well he knew Russian President Vladimir Putin. Now he says he doesn't know him at all. That appears to be closer to the truth.

In November, when he was trying to burnish his foreign-policy credentials during a GOP primary debate, he said of Putin, "I got to know him very well because we were both on '60 Minutes,' we were stablemates, and we did very well that night. "

That claim was debunked at the time because Trump's only connection to the Russian leader was that they both appeared on the same show. He was interviewed in New York, Putin in Moscow and they weren't even in the same segment on the program.

OBAMA: "By so many measures, our country is stronger and more prosperous than it was when we started."

THE FACTS: That progress doesn't include much of an increase in household income, the yardstick people generally consider their most important measure of prosperity. The typical household now earns $57,206 a year, according to Sentier Research. That's 2 percent higher than in June 2009, when the recession ended and six months into Obama's term. (All figures are adjusted for inflation). But it has barely budged since it was $57,147 in December 2007, when the recession began.

KAINE: "I want to tell you why I trust Hillary Clinton. First, she's consistent."

THE FACTS: Not always -- not on the Trans-Pacific Partnership, for example. She promoted the deal as the "gold standard" of trade agreements when she was secretary of state, then turned against it as a candidate who was facing a stiff contest from a primary rival who fiercely and consistently opposed the deal, Bernie Sanders.

Clinton hasn't been consistent in her explanations of why she had her own email server as secretary of state, changing her story as investigations revealed more about her email practices. That issue has contributed to public distrust of Clinton, a problem Kaine was trying to address in broaching the subject of trust in his remarks.

TRUMP: "I never had a second thought in my life."

THE FACTS: He may want to have a second thought about that thought.

In April, Trump told The New York Times that he should not have retweeted an unflattering photo of Heidi Cruz, wife of GOP primary rival Ted Cruz. "Yeah, it was a mistake," he said. "If I had to do it again, I wouldn't have sent it."

Then in May, he had a third thought.

He told Fox News that "I'm not walking it back" after all, and Mrs. Cruz was fair game because she was so involved in the campaign.

Then in the same interview, he had a fourth thought that was much like the second one: "I wish I didn't do it."KAINE: "She'll make it possible to graduate from college debt-free."

THE FACTS: Hillary Clinton's plans would certainly reduce costs, but many students would probably still have to borrow. She has proposed that families who earn less than $125,000 a year will be able to go to in-state colleges and universities tuition-free. Yet many students would still have to pay for room and board, which can make up at least half the cost of attending college.

VICE PRESIDENT JOE BIDEN, on Trump: "I know he's trying to be tough but he's going to go out and carpet bomb. You want to make friends and influence people in the Middle East? So you're going to go carpet bomb innocent people and bad people at the same time, and that's going to help us fight against ISIS?" -- on MSNBC.

TRUMP: "I never said I wanted to carpet bomb. That was Ted Cruz."

THE FACTS: Trump is right. It was his former Republican rival who said repeatedly he would carpet bomb Islamic State targets.

Carpet bombing, by its nature, risks killing large numbers of innocent civilians because it is indiscriminate.

LEON PANETTA, former CIA director: "Hillary Clinton is the only candidate who has laid out a comprehensive plan to defeat and destroy ISIS and keep America safe." -- Democratic convention speech.

THE FACTS: Clinton has been touting her plan for months. It's hardly comprehensive.

The three-part strategy, as described in November, involves crushing IS "on its home turf" in the Middle East, disrupting terrorist infrastructure on the ground and online, and protecting America and its allies.

All are elements already included in Obama's anti-IS strategy. And none addresses the biggest gaps in the U.S.-led response to the Islamic State over the last two years, such as the lack of effective local troops to defeat IS in Syria.

At what point should U.S. ground troops step in? What levels of civilian deaths are acceptable? How exactly does she propose to end Iraq's age-old Shiite-Sunni divisions?

She hasn't said. She's expounded further, but mostly to reject suggestions by Trump and other Republicans.

TRUMP: "I am a person that believes in enhanced interrogation, yes. And by the way, it works."

THE FACTS: While some intelligence officials still maintain the torture of terrorist suspects thwarted plots, none has pointed to a specific instance. The Senate intelligence committee's report in late 2014 concluded that no actionable intelligence was gained from the detainees who were put in ice baths, threatened with death, kept in cages, waterboarded and subjected to sleep deprivation, booming music and other forms of psychological torture.

TRUMP: "Hundreds of people walked out of the Democrat convention last night. I didn't even hear about it. Nobody showed it. "

THE FACTS: If he didn't hear about it, how does he know about it?

The walkout by disenchanted supporters of Bernie Sanders was widely reported at the time.

Did hundreds walk out in protest? That's conceivable but impossible to know with precision because this happened at the same time as people were leaving for dinner.

KAINE: "Don't take it from me. Take it from ... John McCain's chief economic adviser in the '08 race, who estimates Trump's promises would cause America to lose 3.5 million jobs."

THE FACTS: That's a reference to Mark Zandi, chief economist at Moody's Analytics, who did advise McCain's 2008 presidential campaign, though in only a minor role. His analysis concluded that Trump's tax cuts and trade policies would plunge the U.S. into recession and eliminate 3.5 million jobs. But Zandi has supported other presidential campaigns: In this election cycle, he donated to Clinton.

KAINE: Contractors Trump hired to build his casino in Atlantic City "did the work, hung the drywall, poured the concrete. But a year after opening, Trump filed for bankruptcy. He walked away with millions. They got pennies on the dollar." And people in Florida paid deposits on condos, "but the condos were never built. He just pocketed their money and walked away."

THE FACTS: Trump did stiff contractors on the casino. In Florida, he licensed his brand to a condo developer and appeared in marketing materials, attracting buyers. He was paid licensing fees, but condo buyers lost their deposits when the actual developer canceled the project.

TRUMP: "I have nothing to do with Russia, yes... I built an unbelievable company but if you look there you'll see there's nothing in Russia."

THE FACTS: Trump staged the Miss Universe competition in Russia, traveled there for it and boasted that it drew "almost all the oligarchs."

There's no evidence, though, that he has financial ties to Russia. He has neither developed properties nor licensed his name to buildings there, though he's tried.