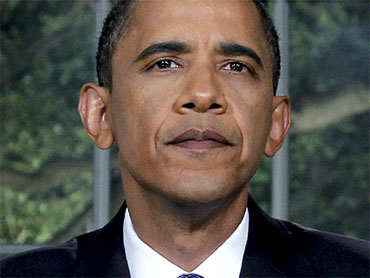 In assuring Americans that BP won't control the compensation fund for Gulf oil spill recovery, President Obama failed to mention that the government won't control it, either.

That means it's anyone's guess whether the government can, in fact, make BP pay all costs related to the spill.

Obama aimed high in his prime-time Oval Office address Tuesday night - perhaps higher than the facts support and history teaches - as he vowed to restore livelihoods and nature from the still-unfolding calamity in the Gulf of Mexico.

A look at some of his statements and how they compare with those facts:

OBAMA: "We will make BP pay for the damage their company has caused and we will do whatever's necessary to help the Gulf Coast and its people recover from this tragedy. ... Tomorrow, I will meet with the chairman of BP and inform him that he is to set aside whatever resources are required to compensate the workers and business owners who have been harmed as a result of his company's recklessness. And this fund will not be controlled by BP. In order to ensure that all legitimate claims are paid out in a fair and timely manner, the account must and will be administered by an independent, third party."

THE FACTS: An independent arbiter is no more bound to the government's wishes than an oil company's. In that sense, there is no certainty BP will be forced to make the Gulf economy whole again or that taxpayers are off the hook for the myriad costs associated with the spill or cleanup. The government can certainly press for that, using legislative and legal tools. But there are no guarantees and the past is not reassuring.

It took 20 years to sort through liability after the Exxon Valdez oil spill in Alaska, and in the end, punitive damages were slashed by the courts to about $500 million from $2.5 billion. Many people who had lost their livelihoods in the spill died without ever seeing a check.

OBAMA: "In the coming days and weeks, these efforts should capture up to 90 percent of the oil leaking out of the well."

THE FACTS: BP and the administration contend that if all goes as planned, they should be able to contain nearly 90 percent of the worst-case oil flow. But that's a big "if." So far, little has gone as planned in the various remedies attempted to shut off or contain the flow. Possibly as much as 60,000 barrels a day is escaping. BP would need to nearly triple its recovery rate to reach the target.

OBAMA: Temporary measures will capture leaking oil "until the company finishes drilling a relief well later in the summer that is expected to stop the leak completely."

THE FACTS: That's the hope, but experts say the relief well runs the same risks that caused the original well to blow out. It potentially could create a worse spill if engineers were to accidentally damage the existing well or tear a hole in the undersea oil reservoir.

OBAMA: "From the very beginning of this crisis, the federal government has been in charge of the largest environmental cleanup effort in our nation's history."

THE FACTS: Early on, the government established a command center and put Coast Guard Adm. Thad Allen in charge of coordinating the overall spill response. But officials also repeatedly have emphasized that BP was "responsible" and they have relied heavily on BP in making decisions from hiring cleanup workers to what oil dispersing chemicals to use. Local officials in the Gulf region have complained that often they don't know who's in charge - the government or BP.

OBAMA: "We have approved the construction of new barrier islands in Louisiana to try and stop the oil before it reaches the shore."

THE FACTS: Louisiana Gov. Bobby Jindal and local officials pleaded for weeks with the Army Corps of Engineers and the spill response command for permission to build about 40 miles of sand berms along the barrier islands.

State officials applied for an emergency permit to build the berms May 11, but as days went by Jindal became increasingly angry at federal inaction. The White House finally agreed to a portion of the berm plan on June 2. BP then agreed to pay for the project.

The corps was worried that in some cases such a move would alter tides and drive oil into new areas and produce more harm than good.

THE FACTS: Obama issued a six-month moratorium on new permits for deepwater drilling but production continues from existing deepwater wells.

Obama: We Will Fight Oil Spill With Everything We Got
Watch the Speech
Full Text of Obama's Speech
Chip Reid: Obama's "Battle" Metaphor Runs Into Problems
Mark Knoller: Obama Offers Strong Words But No Magic Formula
Daniel Farber: Obama Treads Water and Oil in the Oval Office
Reaction: What Happened to Cap and Trade?
Sen. Vitter: Still No Urgency in Gulf Coast Response
Energy Reform Remains Stalled on Capitol Hill
What Will Happen Next?
CBSNews.com Special Report: Disaster in the Gulf