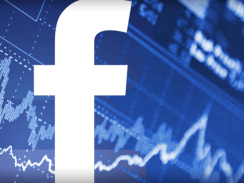 (CBS News) Shares of social networking giant Facebook hit an all-time low on Monday, and although the stock rallied to finish the day at just over $20, the current value is still approximately half of the original price at the company's initial public offering in May 2012.

The stock continues to slide this week after Facebook's original investors were allowed to sell their shares last Thursday. Many chose to sell, sending the stock spiraling to Monday's low.

Internet entrepreneur Alexis Ohanian, who is the co-founder of Reddit , joined CBS business and economics correspondent Rebecca Jarvis on "CBS This Morning" Tuesday, to discuss the tech titan's stock tumble.

Ohanian admitted he had some reservations in May before Facebook's IPO but believes the company, which is dependent on advertising revenue, can rally "if they can invent their way to a new business model, one that still respects users." And while he added that "expectations have been set really, really high," he maintained that "I think they've got the right people in the company to do it."

Jarvis touched on the repercussions for Facebook CEO Mark Zuckerberg. "What he really has to do is assure his employees that Facebook is on the right track," Jarvis said on Tuesday.

Facebook's stock slide can also serve as a lesson for future tech IPOs, Jarvis said and cautioned against investing in "stocks that get priced at IPO based off of the frenzy that investors have around as opposed to what the fundamentals of the company are saying about their future."