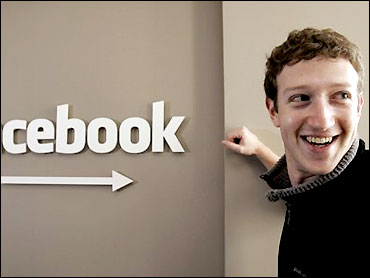 One social graph to rule them all? With more than 400 million people already on Facebook, CEO Mark Zuckerberg is eager to add more and he hopes the company's latest announcements will expand its domination of social networking.

That was the subtext today as Facebook kicked off F8, its annual conference for software developers in San Francisco.

Zuckerberg talked about how the company intends to connect parts of the Web that other social sites are building, part of what he described as the "Open Graph." This is spinoff of a term Facebook popularized to describe its social network, the social graph, which essentially refers to the global mapping of everybody and how they're related.

"These connections aren't just happening on Facebook, they're happening all over the Web, and today with the Open Graph we're bringing all these things together," Zuckerberg contined.

This constitutes an advance on the "news feed" structure that Facebook pioneered several years ago.

Facebook also announced the availability of a collection of plug-in applications that it hopes will change the way people experience the online world. A term Facebook popularized to describe its social network, the social graph essentially refers to "the global mapping of everybody and how they're related.

So-called "social plug-ins," as Facebook calls them, will now allow someone to go to another web site and communicate to their Facebook contacts that they "Like" a certain story or piece of content, but without first needing to log-in to that other site. Users will be able to view personalized versions of other websites they visit. It'll be based on the things they have shared on their Facebook profiles, such as their friends, bands they like or news stories they have liked.

If it works and users embrace it, Facebook could gain valuable insights that could help it sell more advertising, potentially rivaling online ad leader Google Inc. The overarching idea will be to expand the popularity of Facebook Connect, currently used by 100 million people. Facebook Connect lets users log in to other sites using their Facebook credentials.

So it was that Zuckerberg says the changes announced today constituted "the most transformative thing we've ever done for the web."

At a press conference following his keynote, Zuckerberg also announced that Facebook Connect would no longer exist as a standalone product. "We figured that 'Connect' is not descriptive for users," he said.

The company's director of platform product Bret Taylor later added that Facebook Connect "was just an initiative to have Facebook login work on external websites, but the underlying framework is the same." He said that "making that (Connect) distinction was actually causing some developer confusion."

Bret Taylor: The Next Evolution of the Facebook Platform

As it steps up its competition with Google - which also has entered the social networking field with Google Buzz, Facebook likely can expect more questions about privacy safeguards. Zuckerberg seemed to anticipate the question when he said users will be able to control which information to share publicly. But Facebook's earlier previous privacy missteps with an ad system called Beacon. That system allowed advertisers to use Facebook's social graph to come up with targeted advertisements. Facebook subsequently canceled the program after its users rebelled against the idea.

For more about the conference, here's what Zuckerberg had to say in a blog post accompanying the kickoff of F8:

"Today at our third f8, we are making it so all websites can work together to build a more comprehensive map of connections and create better, more social experiences for everyone. We have redesigned Facebook Platform to offer a simple set of tools that sites around the web can use to personalize experiences and build out the graph of connections people are making."

"This next version of Facebook Platform puts people at the center of the web. It lets you shape your experiences online and make them more social. For example, if you like a band on Pandora, that information can become part of the graph so that later if you visit a concert site, the site can tell you when the band you like is coming to your area. The power of the open graph is that it helps to create a smarter, personalized web that gets better with every action taken."

"We think that the future of the web will be filled with personalized experiences. We've worked with three pre-selected partners-Microsoft Docs, Yelp and Pandora-to give you a glimpse of this future, which you can access without having to login again or click to connect. For example, now if you're logged into Facebook and go to Pandora for the first time, it can immediately start playing songs from bands you've liked across the web. And as you're playing music, it can show you friends who also like the same songs as you, and then you can click to see other music they like."