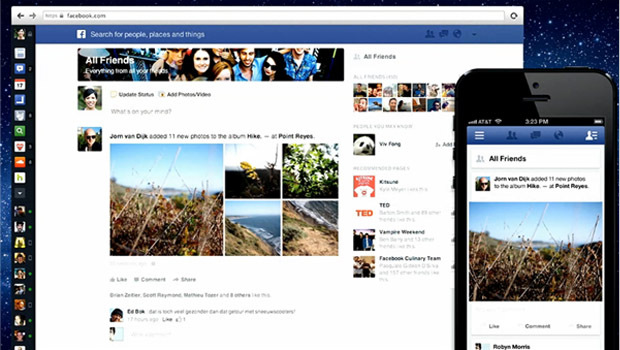 Are you ready? Facebook is changing again. This time the company is focused on clearing the clutter and creating a "personalized newspaper."

Facebook unveiled a redesign of its News Feed on Thursday. The social network hosted a press event at its Menlo Park, Calif. headquarters.

"News feed is one of the most important services that we build," said Facebook CEO Mark Zuckerberg, and added that the company wants to give everyone in the world a copy of the best newspaper in the world: a personalized one.

Zuckerberg says the type of stories told through photos as opposed to words is very different. Facebook's new design will have big images, content-specific feeds and mobile consistency.

The new design will give posts like places and third-party apps more prominence and bigger images. Video will also get a new look. Now, people tagged in a video will have a thumbnail appear on the left side.

Facebook is introducing a variety of ways to look at the News Feed that lets users choose how they experience their feeds. The new feeds include: "All Friends," "Photos," Music" and "Following." The company says it will start rolling out the changes on the Web on Thursday. Mobile apps will start to see changes in the next few weeks.

A recent report from the Pew Research Center's Internet and American Life Project found that some 61 percent of Facebook users had taken a hiatus of at least several weeks for a myriad of reasons.

Facebook maintains that its user engagement remains strong and reports over 1 billion monthly active users. Citing independent analyst reports, the social network says that Facebook's app is the most downloaded mobile app in the United States.

Gartner analyst Brian Blau is not surprised that Facebook is revamping its look again and points out that the social network's main news feed had not undergone an overhaul in about three years.

"To be fair, Facebook continually adjusts the contents of the new feed, but they haven't really revamped its user interface or layout during this time," Blau told CBS News via email.

Blau thinks the changes will be positive for Facebook in the long run.

"If history is any indication, these changes will help Facebook over time as their goal would be to improve the user experience, and the site changes Facebook has made in the past have for the most part improved the service for both users and businesses," Blau said.

Facebook recently introduced a new feature called "Graph Search," which is a robust search engine that will run inside of the social network. Its last major change was the introduction to Timeline on Sept. 22, 2011. Although Facebook promised a quick rollout, it has yet to force all users to switch to the new look.

Facebook was launched in February 2004 from Zuckerberg's dorm room at Harvard University. The social network reports over 1 billion monthly active users as of December 2012.