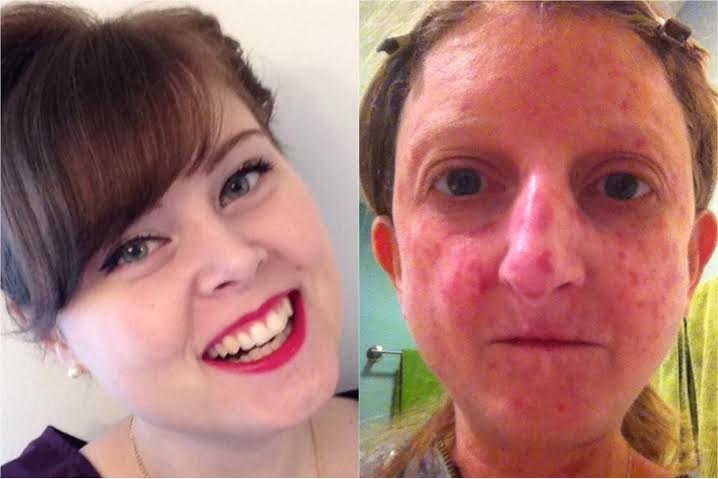 An Illinois woman living with a rare autoimmune disease is lighting up social media thanks to her campaign, #sclerodermaselfies, CBS Chicago reports.

Lisa Goodman-Helfand has a condition called scleroderma, which the Scleroderma Foundation explains is a chronic connective tissue disease affecting about 300,000 Americans. Goodman-Helfand suffers from one of its most common and visible symptoms, a hardening of the skin that can be disfiguring.

"Scleroderma can be fatal when it impacts internal organs," says Goodman-Helfand. "The vast majority of scleroderma patients in the world would change places with me in a heartbeat, because my scleroderma will most likely not impact my life expectancy."

The controversy began last month when Facebook refused to publish Goodman-Helfand's bare-faced photo in an ad to promote her blog, Comfortable in My Thick Skin.

The ad also included a photo of Chanel White, a 23-year-old described as "bravely fighting a devastating battle against major organ failure due to scleroderma." The photos were meant to show that not all struggles with scleroderma are easily seen.

After word of Facebook's rejection of the photo made headlines, the company acknowledged its error.

However, the saga continues. When Goodman-Helfand attempted to promote a post about Facebook reversing its decision, using the same photo, the social media giant once again rejected the ad. Since then, CBS Chicago reports she has received only an automatic rejection email from the company, the same one she got the first time around.

Scientists have yet to discover the cause of scleroderma, though it is common for family members to have other autoimmune diseases, such as thyroid disease, rheumatoid arthritis or lupus, according to the Johns Hopkins Scleroderma Center.

The severity of scleroderma varies from person to person. The disease causes cells in the body to over-produce collagen, reacting if there were an injury needing repair. For reasons that are not yet understood, the cells do not turn off and make too much collagen, preventing various organs in the body from functioning normally.

There is no cure for scleroderma, but some treatments are available to help manage symptoms and limit the damage caused by the disease.

By launching the #sclerodermaselfies campaign, Goodman-Helfand is aiming to spread awareness and increase funding for scleroderma. The campaign asks participants to take a selfie without any makeup on and post it to social media, along with a message about scleroderma and information on how to make a donation to the Scleroderma Foundation or the Scleroderma Research Foundation.

Goodman-Helfand said she hopes this will kick-start discussions around issues that resonate universally, such as body image, self-worth, redefining beauty and not allowing others to tell you something is impossible.

"Don't let other people underestimate the power of human spirit," she said.

As part of the #sclerodermaselfies campaign, she is donating a portion of sales from her book, "Does This Hospital Gown Come With Sequins?" to help fund more research on the disease.