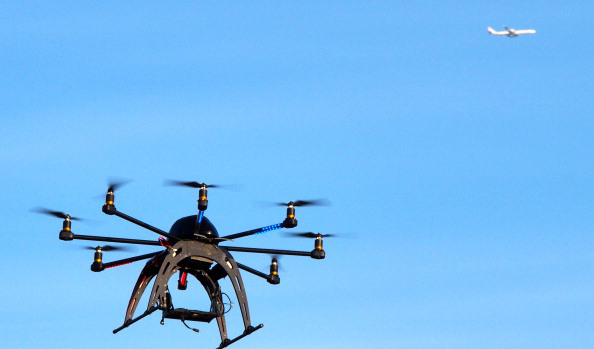 Washington, D.C. The Department of Transportation is reviewing whether the FAA has the authority to require drones be registered at their point of sale, Transportation Secretary Anthony Foxx told CBS News on Friday.

"That's what we're looking at, the question is what can we do on our own and where do we need Congress to intervene," said Foxx. "The administration has an interagency group working on this, that includes the Department of Homeland Security and other departments that will be focused on this."

Requiring people to register their drone at the point of sale would provide "at least some ability to track it back if we find that they are violating some FAA rule," Foxx said. "That's just one example of the type of thing that we are exploring."

Currently, drones are considered hobby aircraft and are exempt from registration because they are supposed to be operated below 400 feet. As CBS has reported, airspace rules are being widely violated. As first reported by CBS News, a record of at least 650 drone sightings have been reported by pilots so far this year. That's compared to 238 in all of 2014.

"The FAA needs the ability to set clear rules for when and where consumers can fly drones, require manufacturers to install basic technological safeguards and ensure consumers receive safety information," said Sen. Dianne Feinstein, D-California, who has introduced a bill to regulate drone use. The near tripling of aircraft-done encounters number "should sound the alarm," she said.

In a statement to CBS News, Brian Wynne, president and CEO of the Association of Unmanned Vehicle Systems International, called for better enforcement of existing rules.

"Unmanned aircraft systems shouldn't fly close to airports, or manned aircraft or above 400 feet," he said. "These are common-sense guidelines, but many new UAS enthusiasts aren't taking the time to understand where they should and shouldn't fly. Any individual who misuses UAS technology, or uses it in a careless and reckless manner, should be held accountable. The FAA needs to enforce its existing rules if a UAS endangers manned aircraft or people on the ground. "

One the biggest challenges to the drone issue is catching the operator.

"While we can identify a drone in the air, tracking that drone back to who is controlling it is an enforcement problem that we have," Foxx said.

Foxx said there are, in fact, at least federal two teams studying the drone issue. In addition to the inter-agency team that includes Transportation Department officials, DHS officials and the national security world, the Department of Transportation has its own working group studying what action it can take immediately. Foxx says he's hoping to hear the findings of the DOT team in weeks, not months -- but bottom line, Foxx said, is that enforcement is coming.

"We've assembled an internal team to spend a lot of time and energy looking at our authority to figure out, you know, what is the most aggressive way that we can deal with this issue," said Foxx.

Stricter enforcement of drone laws will be a move away from an almost exclusive FAA focus on educating drone operators about the rules. Since 2011, the agency has issued just five fines with three more pending for drone use. Another 22 investigations remain open.

Foxx expects drone manufacturers will step up their education efforts and says the agency is looking at geofencing as a possible remedy manufacturers could build into their devices. Geofencing would be software limiting how high a drone could fly and how close it could get to restricted airspace, including airports.

"Geofencing has its benefits and, if manufacturers want to incorporate geofencing into their software, we support them. But as attractive as technology solutions may be, they are no substitute for education," said Wynne. "The operator is responsible for the safety of an aircraft, whether it's manned or unmanned."

In an on-camera interview Tuesday, FAA Administrator Michael Huerta called the at least 13 incidents of drones disrupting wildfire firefighting efforts in California a "game changer." He confirmed that discussions about stronger enforcement and the potential need for new regulations are underway. He added the conversation includes law enforcement officials.

Huerta was referencing the 2014 FBI effort to crack down on laser strikes against aircraft that has resulted in some arrests.

The latest effort, he said, incorporates "bringing together all of the industry who is trying to find ways to safely integrate unmanned aircraft, working with our field teams who are responsible for enforcing aviation laws, and reaching out to the public to make sure they know this is an extremely unsafe thing to be doing."

Despite that FBI crackdown, laser strikes reported by pilots are on pace to set a new all-time record. As of July 17, there had been 3,051 reported.