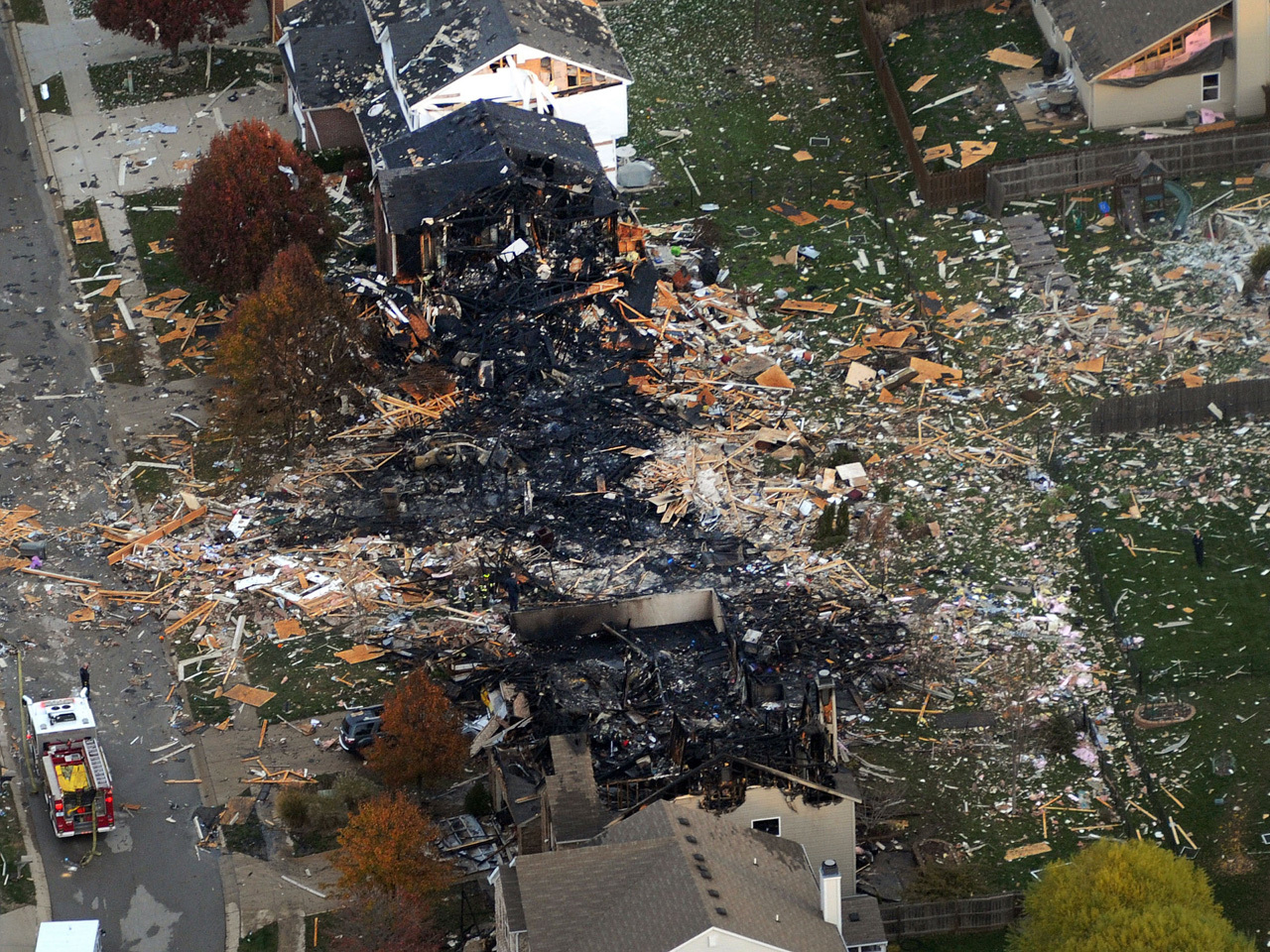 Indianapolis A massive explosion sparked a huge fire and killed two people in an Indianapolis neighborhood, authorities said Sunday. The powerful nighttime blast shattered windows, crumpled walls and could be felt at least three miles away. Officials say as many as 31 homes were damaged so badly they may need to be demolished.

Seven people were taken to a hospital with injuries after the explosion and fire, Deputy Fire Chief Kenny Bacon said.

Bacon also told reporters Sunday investigators haven't ruled out any possible causes of the late-night blast that was heard miles away.

But a congressman who represents the Indianapolis neighborhood says investigators have ruled out a bomb or a meth lab.

U.S. Rep. Andre Carson said he had received that report from Homeland Security officials during a tour of the devastated middle-class subdivision.

The two people killed were an elementary school teacher and her husband, reports CBS affiliate WISH in Indianapolis. Family member confirmed to the station that Jennifer Longworth and her husband Dion Longworth died in the explosion.

Fire Lt. Bonnie Hensley said firefighters put out the flames and then went through the rubble and damaged homes one at a time in case people had been left behind. She said they used search lights until dawn as they peered into the damaged and ruined homes. Two bodies were recovered.

Some witnesses said in televised reports that they heard people screaming "Help me! Help me!" after the explosion and fire and that two parents and two children were safely pulled from one house that caught fire.

The fire department has not released the names of those killed. Hensley said one body was found in one of the leveled homes after the fire was put out.

The explosion at 11 p.m. Saturday destroyed two houses that were side by side and spread fire to two other nearby homes in the neighborhood on the south side of Indianapolis.

Mark Lotter, a spokesman for the mayor, said about three dozen homes were damaged or destroyed. He said 27 were uninhabitable and another eight had significant damage.

The blast was heard for miles around. Authorities said they had no immediate information on the cause. The fire department and other agencies were investigating.

People who were asleep when the blast happened were evacuated in their pajamas, scooping up their pets as they left, authorities said. They left what some described as a chaotic scene of tall flames rising on the Indianapolis skyline.

Survivors reported shattered windows, caved-in walls and garage doors knocked off their hinges. Of the two homes that were leveled by the blast, Hensley said: "There's nothing left."

Bryan and Trina McClellan were at home with their 23-year-old son Eric when the shock wave from the blast a block away shook their home. It knocked out the windows along one side of their house, and their first instinct was to check on their grandchildren, two toddlers who were in the basement. One was holding his ears and saying "Loud noise, loud noise."

Eric McClellan said he ran afterward to the scene of the explosion and saw homes flat or nearly so.

"Somebody was trapped inside one of the houses, and the firefighters were trying to get to him. I don't know if he survived," he said, adding that firefighters ordered him to leave the area.

All power, gas and other utilities in the area were shut off as a precaution as emergency officials swarmed the site.

About 200 people were taken to an elementary school, where some milled about in pajamas and coats they had grabbed as they fled. Some had their dogs on leashes, and one woman had evacuated her home with a cat. Most eventually left to stay with relatives, friends or at hotels, but 15 to 25 remained through the night, sleeping on cots.

Pam Brainerd, a 59-year-old hospice nurse, said she was asleep when the explosion blew out the upstairs windows in her house.

"I was sleeping on the sofa and all of a sudden, my upstairs windows were blowing out and my front door was falling in," Brainerd said. "My front door came off the frame. It was the largest bang I've ever heard."

She stepped outside and saw what she described tall flames one street away. "There was a house engulfed in flames, and I could see it spreading to other houses," she added.