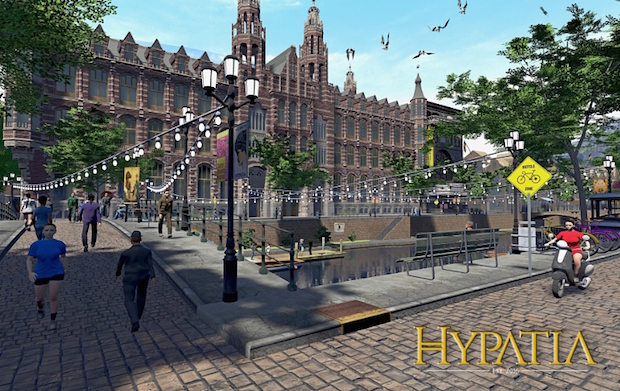 Tech-company Timefire VR, is working on one of the most ambitious VR projects to date: an explorable virtual reality city that users will help to grow and thrive.

The Phoenix, Arizona-based game development company modeled Hypatia after an old European city as a place where people can come together in virtual reality.

"We are building Hypatia as a safe place to explore, learn, be entertained, meet with friends and family, and find delight along the way. There are no guns, no zombies, and no war. This is a place for the discovery of mind, imagination, and self," the company website states.

Hypatia boasts more than 70 miles of streets where users can engage in an array of activities, which include performing in a band, rowing a boat on a canal, visiting a museum, painting a mural or reading a holographic book on a virtual smart phone.

Visitors to the town can earn money to pay for things in the virtual world by creating something in the game: painting a mural or conducting a band.

Hypatia will be offering early alpha access to the VR city in summer 2016.

Take a look at the video below for a sneak peak of the "city of the future."