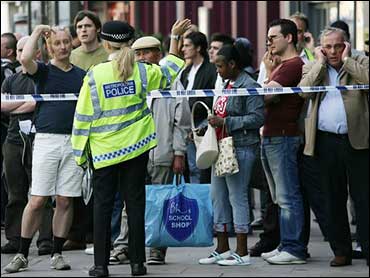 The attacks on London's transit system Thursday appeared less sophisticated than the deadly suicide bombings two weeks ago, but terrorism experts said they may have been sufficient to accomplish the goal.

The "worrying trend" is that the terrorists "have realized that that they don't have to have (very large) explosions" to disrupt people's lives, said John Carnt, a former 30-year veteran of Scotland Yard and managing director of Vance, a global investigation and security firm.

The devices used Thursday appeared to be smaller than the bombs that killed 52 people as well as the four suicide bombers on July 7, Metropolitan Police Commissioner Ian Blair said.

Police said two men were arrested. One was detained near Downing Street, site of the prime minister's residence. The other, later released without charge, was picked up near Tottenham Court Road, close to the Warren Street subway station where one attack took place.

CBS News Correspondent Richard Roth reports that the man who was arrested on Downing Street was wearing a backpack. Police drew their weapons but found nothing suspicious inside the backpack.

Jeremy Binnie, an analyst with the London-based Jane's Terrorism and Insurgency Center, said there were key differences between Thursday's attacks and the previous blasts.

The latest strikes did not take place at rush hour, they targeted more outlying stations and "if there were bombs, they seem to have been duds," Binnie told The Associated Press. "It seems much more amateurish in many ways."

That could suggest a copycat operation, but Binnie cautioned that it was too early to tell. He said investigations into the July 7 blasts showed signs there could be a second terror cell.

As Roth reports, the explosions were small, suggesting they may have simply been detonators which failed to trigger deadly bombs, but police said the bombers' objective was plain.

Keith Burnet, an expert at the Royal Institute for International Affairs, a London-based think-tank, said Thursday's events are part of a "copycat exercise, carried out by people not as sophisticated as the bombers who struck on July 7."

Burnet said there was little that Britain's security forces could do — short of searching every passenger on the capital's huge network of buses and trains — to thwart such attacks.

He said the quick response by police and medics may be partly credited to London's heightened state of alert from the deadly bombings two weeks ago.

One of the greatest fears of law enforcers is the idea that an audacious attack will inspire similar attacks, said Rachel Bronson, director of Mideast Studies at the New York-based Council on Foreign Relations. "It's all done to sow terror, and there's nothing more terrifying than bombs followed by bombs," she said.

Alarmingly, it appears that the group was able to attack in the midst of an intense investigation of the previous bus and train bombings. Often such followup attacks are uncovered and thwarted, Bronson said.

"What is very worrisome, London intelligence, which is among the best in the world, was not only surprised two weeks ago, but they're surprised by this," Bronson said.

Paul Rogers, a terror expert at Bradford University in northern England, said investigators would have lots of forensic evidence to work on from the latest blasts.

"They will have the devices and much can be done to them in terms of fingerprinting, DNA, the origin of the detonators and where the bags were bought," he said. "If this was a series of dummies deliberately timed to cause mass panic then it puts the people responsible at considerable risk of being found."

He also said the attacks could point to the existence of another terrorist cell in Britain.

"The one ominous thing is that this appears to be a group of a similar nature to the previous July 7 bombers," Rogers said. "It implies there might be another cell primed and ready to attack."