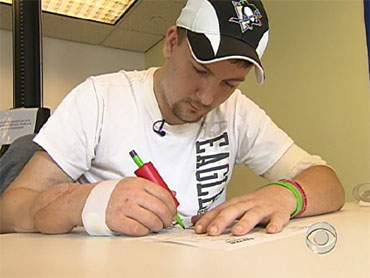 Four months later, the hand is actually starting to work.

"I can feel the soft touch up to there," Josh Maloney said. "I can feel hot and cold."

Maloney served two tours in Iraq, but came home and lost his hand in a training accident. He tried prosthetics, but like 40 percent of the military's hand amputees, Maloney found prosthetics too bulky and unreliable to use, but it was embarrassing to go without.

"To walk around outside and to be missing a hand - it was extremely obvious," Maloney said.

Maloney is part of an experiment in which the military is trying to learn if replacing the injured hands of soldiers and marines might someday replace the use of prosthetics, reports CBS News correspondent Wyatt Andrews.

The operation at the University of Pittsburgh was difficult - 11 hours to connect his new hand's bones, muscles, nerves and skin.

His occupational therapy is harder still - six hours a day of merciless pain.

"The slightest touch can feel like 1,000 needles," Maloney said.

But the real experiment is how doctors are preventing Maloney's body from rejecting the new hand. During the operation, surgeons also transplanted bone marrow from the donor, hoping to teach his immune system to accept the hand. Here's why that's crucial: Every other hand transplant recipient, including the first, Matt Scott, a paramedic instructor, has to take two or three anti-rejection drugs every day. But the drugs so suppress his immune system - he lives with a higher risk of fatal infection.

"If somebody in the room has a fever I should stay away from them," Scott said. "The drugs themselves have bad side effects."

But Scott, thanks to the donor's bone marrow, takes only one anti-rejection drug - so far.

According Colonel Bob Vandre, who oversees the experiment for the Pentagon, this could be the breakthrough that makes hand transplants possible for more veterans.

"That's the only barrier, rejection," Vandre said. "If we can solve that, which it appears we can, why not."

Maloney now sees a day when he can touch, play baseball or hold a child.

"What do you see in this different future?" Andrews asked.

"The same future I saw before I got hurt," Maloney said. "I don't feel broken anymore."

And now, as every nerve and muscle comes alive in the hand of Josh Maloney, so does the hope of new way to treat amputees.