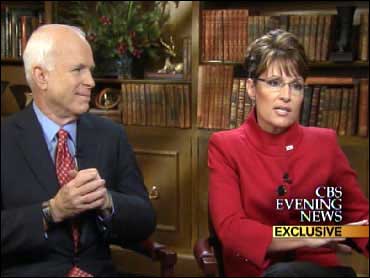 Sen. John McCain and Alaska Gov. Sarah Palin were in Ohio Monday for a campaign rally. In their first joint interview, CBS News anchor Katie Couric asked them about a statement Palin made the other day, because it didn't seem to square with her running mate's policies in the war on terror in Pakistan. What follows is a partial transcript of the interview.


Katie Couric: Over the weekend, Gov. Palin, you said the U.S. should absolutely launch cross-border attacks from Afghanistan into Pakistan to, quote, "stop the terrorists from coming any further in." Now, that's almost the exact position that Barack Obama has taken and that you, Sen. McCain, have criticized as something you do not say out loud. So, Gov. Palin, are you two on the same page on this?

Sarah Palin: We had a great discussion with President Zardari as we talked about what it is that America can and should be doing together to make sure that the terrorists do not cross borders and do not ultimately put themselves in a position of attacking America again or her allies. And we will do what we have to do to secure the United States of America and her allies.

Couric: Is that something you shouldn't say out loud, Sen. McCain?

John McCain: Of course not. But, look, I understand this day and age of "gotcha" journalism. Is that a pizza place? In a conversation with someone who you didn't hear … the question very well, you don't know the context of the conversation, grab a phrase. Gov. Palin and I agree that you don't announce that you're going to attack another country …

Couric: Are you sorry you said it?

McCain: Wait a minute. Before you say, "is she sorry she said it," this was a "gotcha" sound bite that, look …

Couric: It wasn't a "gotcha." She was talking to a voter.

McCain: No, she was in a conversation with a group of people and talking back and forth. And … I'll let Gov. Palin speak for herself.

Palin: Well, it … in fact, you're absolutely right on. In the context, this was a voter, a constituent, hollering out a question from across an area asking, "What are you gonna do about Pakistan? You better have an answer to Pakistan." I said we're gonna do what we have to do to protect the United States of America.

Couric: But you were pretty specific about what you wanted to do, cross-border …

Palin: Well, as Sen. McCain is suggesting here, also, never would our administration get out there and show our cards to terrorists, in this case, to enemies and let them know what the game plan was, not when that could ultimately adversely affect a plan to keep America secure.

Couric: What did you learn from that experience?

Palin: That this is all about "gotcha" journalism. A lot of it is. But that's okay, too.

Couric: Gov. Palin, since our last interview, you've gotten a lot of flak. Some Republicans have said you're not prepared; you're not ready for prime-time. People have questioned your readiness since that interview. And I'm curious …

Couric: … to hear your reaction.

Palin: Well, not only am I ready, but willing and able to serve as vice-president with Sen. McCain if Americans so bless us and privilege us with the opportunity of serving them, ready with my executive experience as a city mayor and manager, as a governor, as a commissioner, a regulator of oil and gas.

McCain: This is not the first time that I've seen a governor being questioned by some quote, "expert." I remember that Ronald Reagan was a "cowboy." President Clinton was a governor of a very small state that had "no experience" either. (laughter) I remember how easy it was gonna be for Bush I to defeat him. I still recall, whoops, that one. But the point is I've seen underestimation before. I'm very proud of the excitement that Gov. Palin has ignited with our party and around this country. It is a … level of excitement and enthusiasm, frankly, that I haven't seen before. And I'd like to attribute it to me. But the fact is that she has done incredible job. And I'm so proud of the work that she's doing.