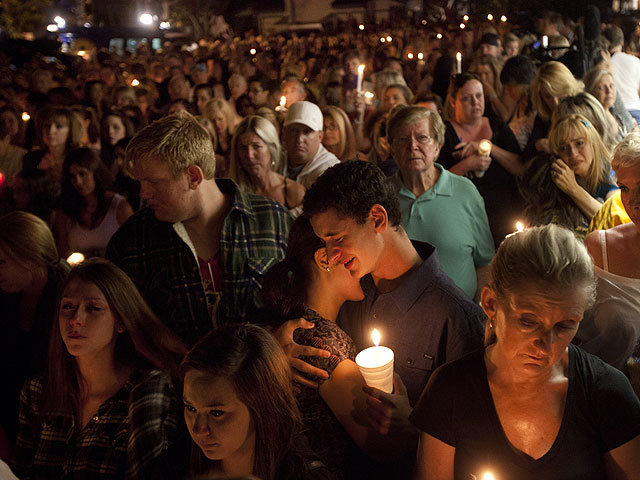 SEAL BEACH, Calif. - The horror for most people in this quiet seaside town began to unfold with the staccato `pop, pop, pop' of a handgun as a shooter opened fire in the beauty salon where his ex-wife worked. But for Michelle Fournier, family and friends say, the nightmare began much earlier.

Fournier, a stylist at Salon Meritage, was engaged in a long and bitter custody struggle with ex-husband Scott Dekraai for custody of their 8-year-old son and Fournier had recently told friends and family and said in court documents that she feared for her safety as Dekraai became more and more unbalanced.

Dekraai, 41, was being held without bail Friday on suspicion of murder after police alleged he barged into the upscale salon and opened fire, killing six women and two men and leaving another woman in critical condition. Police said Thursday that Fournier was among the dead.

Fournier's brother said he saw Salon Meritage on TV and immediately sensed what had happened.

"The worst part about it was seeing the news and seeing the awning and knowing exactly what happened without even hearing a word," Butch Fournier said. "That's what killed me."

The quaint, sun-splashed town of Seal Beach, with its Main Street of vintage shops, restaurants and boutiques, has had only had one homicide in the previous four years — and this week's bloodbath left residents reeling.

Several hundred attended a prayer service at a church across from the salon on Thursday night and more than 1,500 showed up with candles at a vigil in the parking lot of the shopping center where the salon stands. About a half-dozen therapy dogs, wearing green vests embroidered with names like Anise and Riley, moved through the crowd providing comfort to mourners.

"They got up on Wednesday morning and went to earn an honest living or do something they enjoyed ... No amount of planning or decision-making could prepare them and their friends and loved ones for what would unfold."

Dekraai suffered post-traumatic stress disorder from a 2007 tugboat accident that mangled his leg and left a colleague dead but his marriage to Fournier was falling apart even before that, and the court battle over their son was still raging Wednesday before the shooting.

Fournier had indicated to friends and in court documents that she was afraid of her ex-husband. Her friend Sharyn White said that just weeks before the killings, Fournier told her that her ex-husband had stopped by and threatened to kill her and others there.

White, who is also Dekraai's step-aunt, said Fournier told her she took the threat seriously, though others in the salon laughed it off. She said Fournier also had told her that when they were still married Dekraai had once held a gun to her head.

"She said 'Sharyn, Scott has threatened to come in here and kill us,"' White said.

There is no sign that Fournier sought a restraining order against her husband, though other friends agree she was afraid.

"As recently as a month ago, she told me how scared she was and I offered to hire her bodyguards," said Tim Terbush, a longtime friend. He said she turned him down because she feared that would only make Dekraai angrier.

Police officers who arrived within minutes of reports of shots fired encountered a horrific scene, with bodies of victims scattered throughout the salon and a man bleeding in the parking lot outside.

Ron Sesler, working the lunch rush at his restaurant next door, said he thought the rapid "pop, pop, pop" he heard was a jackhammer until a terrified woman ran through the restaurant and into the kitchen, screaming, "They're shooting people!"

Over the next nightmarish minutes, Sesler watched as hairstylists and customers from the next-door Salon Meritage streamed into his restaurant seeking refuge. Hysterical stylists still wearing their smocks with hair clips in the pockets and customers halfway through dye jobs and permanents piled inside Patty's Place as Sesler locked the door and his wife frantically dialed 911.

Police soon showed up and used the restaurant as a temporary base to interview witnesses.

"The whole place was filled, it was whoever survived," said Sesler, 68, still noticeably shaken on Thursday as he tried to resume business as usual. "We just locked the doors and waited for police. It seemed like a long time — minutes — but it was probably seconds."

He said David Caouette, the only victim killed outside the salon, was a regular at the restaurant who just happened to park next to the gunman as he was running back to his truck.

"If he was late, the guy would have driven away. If he was early, he would have been in here," Sesler said.

Fannin was the salon's owner, according to Sesler and other family and friends.

The witnesses who gathered in Sesler's restaurant, many of them longtime friends, said Dekraai first took aim at Fannin, and shot him once in the head and then turned to his own ex-wife, shooting her three times. Fannin's wife, Sandy, escaped only because she was in the back, possibly mixing hair dye, Sesler said.

A masseuse hid in the massage room with two others and locked the door. Two more hid in the bathroom, Sesler said, according to accounts from people who were interviewed by police inside his restaurant in the immediate aftermath.

An elderly woman fled the salon after the shots broke out and seemed frozen on the sidewalk. Sesler's wife, Patty, grabbed her through the restaurant's side door and pulled her into the kitchen, Sesler said. The shooter had been staring directly at the woman but didn't fire, he said.

Just hours before the shooting, Sesler said, Michelle Fournier had stopped by the restaurant to ask about the lunch special and promised to come back.

Throughout Seal Beach and the nearby city of Huntington Beach, where Dekraai lived, his bitter custody battle with Fournier was common knowledge among friends, and the couple attended what should have been a routine court hearing Tuesday in the matter.

While court papers show the case was continued until December, Fournier's boyfriend said the case had greater importance.

He told The Associated Press the judge had pressed Dekraai to explain why he was continuing to push for more time with his boy. A report by a court-appointed psychologist found the current custody arrangement was working and should not be changed, said Michael Warzybok, who dated Fournier for a year.

"The judge was like what are you going to come back for?" Warzybok said. "All of a sudden he didn't get his way."

Dekraai had tried to meet Fournier for coffee the day of the shooting, but she refused.

In court documents filed in February, Dekraai said he had 56 percent custody of his son and his wife had 44 percent. He wanted the court to grant him "final decision making authority" when it came to matters involving their son's education and his medical and psychological treatment.

In court documents filed in May, Fournier described her husband as "almost manic" when it came to controlling their son.

She said then that giving Dekraai such authority would be akin to "a situation where the inmates are running the asylum."

Fournier also alleged that Dekraai had called 911 at least once and "advised that he was going to kill himself or someone else."

Board-certified psychiatrist Ronald Silverstein told the court that he had diagnosed Dekraai, a tugboat operator, with post-traumatic stress disorder that he determined was caused by the 2007 accident.

Court records show a temporary restraining order was obtained by Dekraai's stepfather in 2007 after the man said Dekraai attacked him, leaving him with cuts and bruises on his face and right arm. The order also said his young son had witnessed the attack.

Growing up, Dekraai's parents had a difficult time raising their son and had to take the door off his bedroom because he was having sex with girls when he was as young as 12, said White, his step-aunt and a friend of Fournier's. Sometime later, they sent him to live with his grandparents.

Dekraai said in court documents that his ex-wife had poor parenting skills and a drinking problem. She called him several times a day, Dekraai said, often screaming at him over the phone and in front of their son. He said she addressed him by an expletive instead of his name and made racist references to his current wife.

At the strip mall where the shooting occurred, people streamed by a memorial to pay their respects Thursday. Susan Davenport, who was Dekraai's neighbor and knew him since his teenage years, choked up as she spoke of Fournier.

"She was a loving mom. She was a wonderful woman. She was kind. She was generous. She was all of those things," she said.