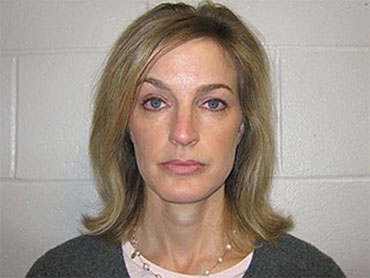 DERRY, N.H. (CBS/AP) Former high school teacher Melinda Dennehy won't be going to jail after pleading guilty Monday to a charge she e-mailed nude photographs of herself to a 15-year-old student at Londonderry High School.

"I am truly sorry for my actions and poor judgment," Melinda Dennehy said in court after the judge agreed to her negotiated plea to a misdemeanor charge of indecent exposure. She originally faced a felony count.

"I wish the student and his family well," she added.

Dennehy, 41, of Hampstead, could have faced up to seven years in prison if she had gone to trial on the felony. As part of her plea agreement, Dennehy's one-year jail sentence was suspended for two years on condition she remain on good behavior and have no contact with the teen or his family, or go to the school. She resigned three weeks after she was charged in March.

Dennehy said the matter has attracted widespread attention, some of which did not concern the students, "but rather, the allure of a sensational story, which has only served to hurt everyone involved."

Dennehy said she regretted that some of the reporting on what happened was inaccurate, and that her actions led to that reporting. Her attorney declined to comment when asked later what Dennehy meant by that.

The boy who received the photographs told police that Dennehy also sent him text messages offering to have sex, and that she kissed him on the mouth in a classroom at least twice in recent months.

Several male students, including the recipient of the images, were interviewed, and at least one photograph showed Dennehy with her genitals exposed, Londonderry Detective Kristen Gore wrote in an affidavit.

The student who received the photos told police he forwarded them to two male friends. He also told police that Dennehy sent him text messages "continuously."

Dennehy used her private AOL account to e-mail the photographs, according to a copy of an e-mail supplied to police, the affidavit said.

Neither the teen nor his family were in court. Prosecutor Kevin Coyle told Derry District Court Judge John Coughlin that family supported the plea agreement "and want to put this incident behind them."

Dennehy taught sophomore English at the school for three years. As part of the negotiated plea, she agreed to surrender her teaching certificate.

"I am hopeful that all of my students will go forward to live enriched lives," Dennehy said. "I plan to continue with counseling and treatment and will endeavor to lead a productive life."

Dennehy also apologized to the school, which she said continues to be an outstanding example for educational institutions in New Hampshire and in the United States.