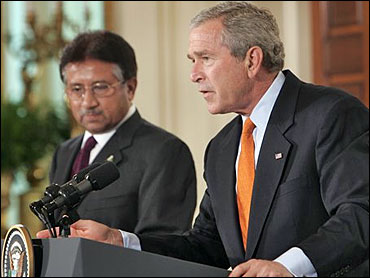 A British newspaper reported Tuesday that former President George W. Bush reached an agreement 10 years ago with his Pakistani counterpart that would allow unilateral American military action against al Qaeda's senior leadership inside the Asian nation if and when they were found.

The agreement -- which former Pakistani President Pervez Musharraf denies completely -- made it clear the Pakistanis would publically protest the any such operation, but take no action to stop it, according to The Guardian.

As CBS News correspondent Elizabeth Palmer reports from Islamabad, that may be exactly what happened last week when a team of U.S. Navy SEALs raided a compound in Abbottabad, Pakistan and killed Osama bin Laden.

Special section: The Killing of Osama bin Laden
Report: U.S. was ready to fight Pakistanis on raid
"60 Minutes": Obama on the Pakistan raid

"There was an agreement between Bush and Musharraf that if we knew where Osama was, we were going to come and get him," a former senior U.S. official told The Guardian. "The Pakistanis would put up a hue and cry, but they wouldn't stop us."

Musharraf himself completely dismissed the report in a telephone interview with a Pakistani television station, telling ARY News there was never an agreement allowing U.S. unilateral military action, verbal or written.

Pakistan has been hugely embarrassed by the raid -- insisting they had no clue the al Qaeda chief hid under their noses for years in a compound almost next door to a massive military training complex and in the same town as intelligence agency offices.

CBS News security and terrorism analyst Juan Zarate says The Guardian's claim of an explicit secret agreement allowing a unilateral U.S. raid on Pakistani soil is probably overstated. Zarate says that in 10 years of regular discussion about Islamic militants in Pakistan, leaders in Islamabad would clearly have arrived at an "understanding that the U.S. would be aggressive" if it located any senior al Qaeda leaders, but he doubts that would have led to a written or verbal agreement.

Calling relations between Pakistan and the U.S. in the wake of the raid "frosty," says Palmer, "would be an understatement."

Pakistan's premier intelligence agency, the ISI, has helped the U.S. capture high-value targets in the last decade, and the spy chiefs feel completely betrayed by their American counterparts, who apparently shared no information about bin Laden's suspected whereabouts, or the operation to get him before it took place.

However, in a good sign, late Monday the Pakistanis agreed to a U.S. request to let CIA agents gain access to bin Laden's three widows, who were taken into Pakistani custody after the raid.