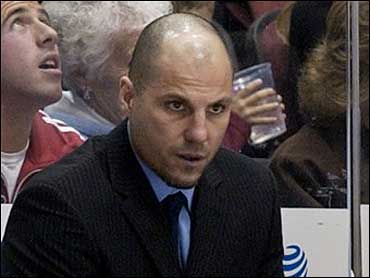 Former NHL player Rick Tocchet pleaded guilty Friday to running a sports gambling ring, but might not have to serve any jail time.

Tocchet, who played for Philadelphia, Pittsburgh, Los Angeles, Boston, Washington and Phoenix in a career that spanned 22 seasons, is on leave from his job as an assistant coach for the Phoenix Coyotes, where he had been Wayne Gretzky's right-hand man on the Phoenix Coyotes' coaching staff. He pleaded guilty to charges of conspiracy to promote gambling and promoting gambling. Such offenses usually do not carry a jail sentence for first-time offenders.

The 43-year-old Tocchet is the third man to plead guilty in the case, which New Jersey authorities dubbed "Operation Slapshot." The others, including state Trooper James Harney, are expected to get jail time.

Janet Jones, the wife of hockey great Wayne Gretzky, was accused of betting but was not charged in the case.

Prosecutors said in February 2006 that the ring handled $1.7 million in wagers during a 40-day stretch that began at the end of 2005 and included college football bowl games and the Super Bowl. They said there were no bets on hockey games.

Tocchet did not speak during Friday's court hearing except to answer yes or no questions. When asked by his attorney, Kevin Marino, if he ever bet on professional hockey, Tocchet said "no."

Marino said that by calling the case "Operation Slapshot," the state police were suggesting it involved betting on hockey.

"I'm sure everyone remembers the manner in which this case was initially announced and described," Marino said. "I think today's plea speaks for itself."

The maximum sentence for the charges Tocchet pleaded guilty to are 10 years in prison and a $50,000 fine.

"It's a huge operation and I think it exposes to people the allure of gambling, illegal gambling, in New Jersey," New Jersey Criminal Justice Director Gregory A. Paw said outside the courthouse.

Paw would not say whether prosecutors would ask for jail time for Tocchet.

"He was a very good player — a rare guy who could score and fight," says CBSNews.com's John Kreiser, who has written several books and magazine and Web site articles on the NHL. "He was a valuable player for a long time. He was a member of 1992 Penguins title team and had 40+ goals three times, 440 in his career — along with nearly 3,000 penalty minutes."

Marino said Tocchet has not spoken with the NHL about how his guilty pleas will affect his coaching career.

"Even if he doesn't do jail time, it's not the kind of association the NHL wants with its personnel," said Kreiser.