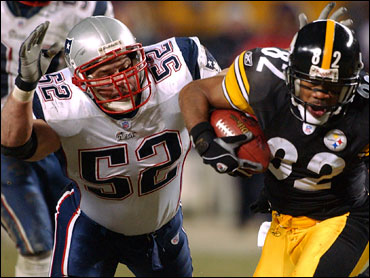 Six retired NFL players are among a dozen athletes who agreed to donate their brains to study the long-term effects of concussions, The New York Times reported on its Web site Tuesday night.

Former New England Patriots linebacker Ted Johnson, one of the players who committed to the donation, hopes Boston University's Center for the Study of Traumatic Encephalopathy can help clear up the debate on the issue.

"I shouldn't have to prove to anybody that there's something wrong with me," Johnson told the newspaper.

The 35-year-old's neurologist has pointed to Johnson's multiple concussions between 2002-05 as a cause of his permanent and degenerative problems with memory and depression.

"I'm not being vindictive. I'm not trying to reach up from the grave and get the NFL," Johnson added. "But any doctor who doesn't connect concussions with long-term effects should be ashamed of themselves."

Among the living athletes, most with a history of concussions, who have agreed to donate their brains for examination after their deaths are former NFL players Frank Wycheck, Isaiah Kacyvenski and Ben Lynch. Also participating are Noah Welch, who played hockey for the Florida Panthers last season, and Cindy Parlow, a former member of the U.S. national soccer team.

The center is expected to announce Thursday that former Houston Oilers linebacker John Grimsley was the fifth deceased NFL player found to have brain damage commonly associated with boxers, according to the Times. Andre Waters, Mike Webster, Terry Long and Justin Strzelczyk were the first four.

"We support all research that would further the scientific and medical understanding of this injury, which affects thousands of people, athletes and nonathletes alike, every year," NFL spokesman Greg Aiello said. "Hundreds of thousands of people have played football and other sports without experiencing any problem of this type, and there continues to be considerable debate in the medical community on the precise long-term effects of concussions and how they relate to other risk factors."

The NFL is conducting its own study on concussions, Aiello expected the results to be published in 2010.