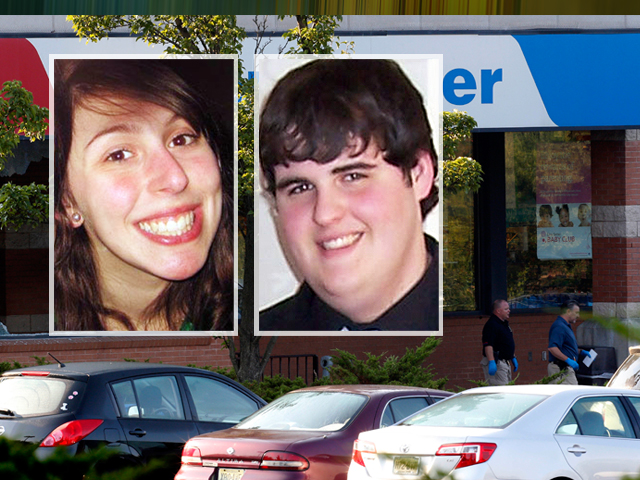 "I believe everybody in the store was a target," Kaplan said. "It appears he opened fire on the employees that he observed in the store when he entered the store."

Tyler is an ex-Marine who worked at the store for about two weeks, WCBS-TV reports. He served in the military from 2008 to 2010.

Tyler's cousin, Shanteya Dyson, of New York City, told The Associated Press that Tyler, who was never happy in the Marines, was discharged after he became ill and was hospitalized. An uncle of Tyler's said that he suffered from depression.

Tyler, an infantryman from Brooklyn, never served overseas, said Marine spokeswoman Capt. Kendra Motz. She wouldn't comment on the circumstances of his discharge.

Dyson said Tyler, whose father died when he was young, had not been the same since his mother died of cancer about five years ago.

"That was his best friend. He was always a quiet guy. But he got more quiet. He really didn't speak at all. He was just blank," said the 26-year-old Dyson. "I wish it didn't turn out this way."

There were 12 to 14 people in the store at the time of the shooting, Kaplan said. Tyler fired outside at one employee, who ran inside and warned co-workers as Tyler entered. Tyler then fired at five employees in one aisle, killing an 18-year-old woman and a 24-year-old man as other workers hid, he said. At least 16 rounds were fired, some breaking the front windows.

Tyler then drew a handgun and shot himself, Kaplan said.

Old Bridge schools Superintendent Timothy Brennan said police told the school district that the victims were Christina LoBrutto, 18, and Bryan Breen, 24. LoBrutto graduated from Old Bridge High School this year and was a horn player in the school band; Breen graduated in 2006. They worked as cashiers at the store, CBS New York station WINS-AM reports.

Brennan said students are preparing a vigil for Friday night, and said six guidance counselors and two crisis counselors would be on hand.

LoBrutto's family said in a statement that they were "praying for all of the victims and their families" and asked for privacy, WCBS-TV reports.

"This was her first overnight shift," one of LoBrutto's friends told WCBS-TV.

"Her parents never let her out past 12," another friend said.

Employees said the gunman pumped the weapon toward the ceiling and sprayed the store with gunfire, WINS-AM reports.

Kaplan said he doesn't believe the two who were killed were specifically targeted.

The motive is under investigation.

Police found both weapons and extra ammunition at the scene, Kaplan said.

The store was closed to the public at the time of the shooting. It was scheduled to open at 6 a.m.

Tyler moved to an apartment near the Pathmark earlier this summer, neighbors said. Co-workers said he had been only working at the store for a few weeks.

Pathmark worker Miranda Miranda said she steered clear of Tyler. "The way he looked at me, he gave me an uneasy vibe," she said.

Miranda had regularly worked the overnight shift on Thursday but said LoBrutto agreed to take over the shift for her a few weeks ago.

"Right now, all I know is what keeps coming into my mind," she said. "That could've been me."

Tyler spent the July 4 weekend drinking at Jersey shore bars with Manase Acheantong, who said Tyler was his friend's cousin.

"He was going through regular struggles like everyone else, but you didn't expect him to go crazy," Acheantong, 25, of Old Bridge, told WCBS-TV.

John Niccollai, president of a foodworkers union that represents some store employees, said Pathmark officials and workers told him the gunman wore military clothing and had just punched out for the night before coming back into the store and opening fire.

Many of the employees escaped gunfire, Niccollai said, when an assistant manager, "who I would view as a hero," helped many workers to get out of the store through the back door.

Kaplan and police walked through the shooting scene at the supermarket Friday morning, with two long windows in the front completely shot through. Police kept onlookers away; a number of vehicles were in the parking lot outside, along with police cars.

The store and its parking lot were closed.

A spokeswoman for Pathmark's parent company, Montvale-based Great Atlantic & Pacific Tea Co. said Friday the company is "deeply saddened" by the shooting and is cooperating with investigators.

"We express our deepest sympathies to the families of the victims and our appreciation to local law enforcement," spokeswoman Mary Connor said.

Old Bridge is a bedroom community of about 65,000 just across the Raritan Bay from New York City's Staten Island borough.