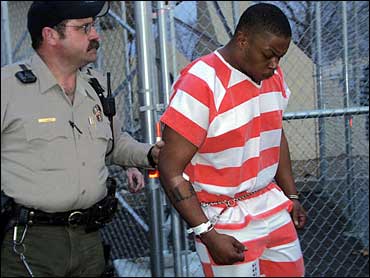 Prosecutors say they will seek capital murder charges against the former Marine accused of abducting and killing a 19-year-old Texas woman as she left her job at Wal-mart.

Surveillance cameras captured the kidnapping of Megan Holden, whose body was found 400-miles away in a ditch along an interstate.

Police say her alleged abductor, Johhny Lee Williams, was later shot during a robbery attempt in Arizona, and surrendered at a hospital. He was driving the woman's pickup truck, police say.

Williams, 24, was being held on a $1 million bond on an aggravated kidnapping charge from Texas, authorities said.

"Something happened to my son," the suspect's mother, Pat Williams, told Dallas television station KDFW, saying he had trouble adjusting to civilian life after serving in Iraq. "Some of the things that he endured I may never know. But it changed who he is and for that I'm sorry."

The victim's mother was in a wreck while driving to Tyler. She was shaken and covered with cuts and bruises after flipping her car three times, a relative said.

captured on videotape
in chilling detail Wednesday after the student at Tyler Junior College clocked out from the Wal-Mart just before midnight.

The apparent abductor — a man in a long, dark coat — was seen loitering around the front entrance of the store "for a good period of time," Tyler police spokesman Don Martin said. The man was also seen on tape about 90 minutes before the abduction, emerging from a bathroom and walking around inside the store.

The tape later shows Holden getting into her truck and the man "running up behind her and either hitting her or pushing her," Martin said.

Two days later, her body was found near Stanton, about 380 miles west of Tyler.

Tyler Police Chief Gary Swindle provided little detail about the killing, but said Holden died of a gunshot wound, adding: "We have every indication that she was shot at the location where her body was found."

Authorities said Williams kept heading west as he continued his crime spree, attempting a robbery at an Arizona RV park, but was foiled by a pistol-packing store worker who fired the shot that landed Williams in the Arizona hospital where he was treated and then taken into custody.

"He said, 'This is robbery, I want all the money in the cash register,'" retired New York City firefighter Richie Chapman said. "And as he said that, he drew a weapon from underneath his shirt, and I drew and fired."

In addition to aggravated kidnapping charges, Williams also could face federal charges of interstate transport of stolen goods, kidnapping or carjacking, according to Jeffrey Millslagle with the FBI in Tyler.

It was not known if Williams had an attorney.

Police said Williams, who was discharged last year after four years as a Marine, was arrested last month in Tyler on a cocaine possession charge. He was released the same day on $2,000 bond.

Police said Williams also was involved in an armed robbery at a convenience store in Texas on Thursday.

The kidnapping and killing has shocked this town of 86,000 people.

About 100 people sang "Amazing Grace" and prayed during a candlelight vigil held outside the store Friday evening. "I just remember she was nice and pleasant and sweet," said mourner Beverley Thomasson, 61.

A makeshift memorial was set up at the Wal-Mart on Friday. More than a dozen flower bouquets, some with notes including "Megan we will miss you," were placed on a bench by passing shoppers.