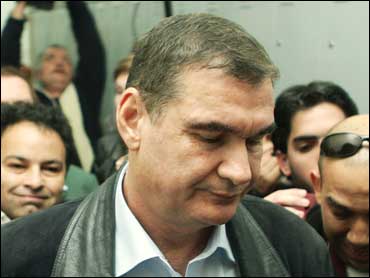 Former Israeli Justice Minister Haim Ramon was convicted Wednesday of kissing a young female soldier against her will — a case that riveted the country's attention and added another layer of scandal to Israel's beleaguered leadership.

The verdict was expected to clear the way for Prime Minister Ehud Olmert to launch a major Cabinet shake up.

Meanwhile, Israel's attorney general has told President Moshe Katsav to move out of his official residence in Jerusalem while he takes a leave of absence to fight off accusations that he committed rape and other crimes, media reported Wednesday.

Ramon, 56, was charged with sexual misconduct after kissing the woman, 21, at a party at the Defense Ministry on the first day of Israel's war with Hezbollah guerrillas in Lebanon last summer. Ramon, who is divorced, said the woman had flirted with him and the kiss was consensual.

"There are some lines that cannot be crossed," said Judge Hayuta Kochan, who read out the unanimous verdict by a three-judge panel. "This was not a kiss of affection. This has all the elements of sexual crime."

Ramon could face up to three years in prison. He faces sentencing on Feb. 21, Israeli media said. Ramon, who left the courthouse without commenting to reporters, is expected to appeal.